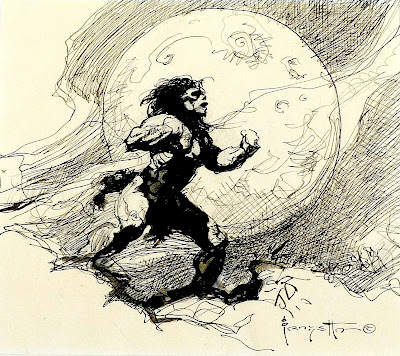 I used to own this little gem of a sketch and stupidly sold it many years ago. What a great image, isn't it? I always thought of Frank whenver I'd see it...Frazetta roaring at the universe, defiantly confronting everything and anything. It might be Tarzan, or a barbarian, or a caveman, but, for me, it's a Frazetta self-portrait. The shadows, the mood, the lines pulsing with life around him all make this drawing resonate and simply explode with the naked power of life. That's what Frank is all about, namely, life. and life lived to the fullest. It turned up at the San Diego Con last summer with a hefty price tag of $15,000.
I 'm going to leave it up here to guard my site while I take a break. I have some living to do...photographic safaris, vacations, and projects of many kinds. I'll be back with more posts after I recharge my inspiration. I still have things to say about Frank and sex and photography. I also have some video, some Lord of the Rings studies unseen, and a few other surprises. The world of Frazetta is vast. I'm trying to open a few new doors and pave some new pathways. I consider this a starting point for future Frazetta fans and scholars to move the stories forward and deepen their content. That is the only way he is going to stay relevant and known and loved. We need to provide his living art with a wide assortment of living voices. My story is a small part of a very grand mosaic. Frank needs to occupy a permanent and important place in art history.
I'll continue to monitor the site for submitted comments.
Thanks again to everyone for adding energy to this site.
(c)2012 Doc Dave Winiewicz
Posted by DocDave at 6:53 AM 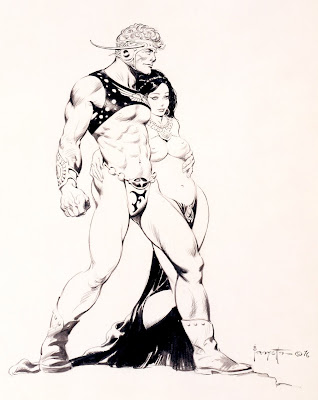 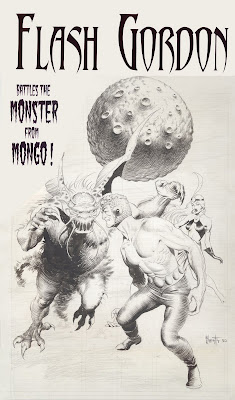 The conventional wisdom about Frazetta and the science-fiction genre is that he had little motivation for the subject matter. Frank explained in several interviews that he had to push himself to get motivated enough to draw or paint in that genre. He much preferred the worlds of ER Burroughs and RE Howard.
There are a couple of exceptions to this. The story goes that early in their friendship he was visiting Al Williamson. Al was showing a 16mm print of an early Buster Crabbe Flash Gordon serial to some friends. Al, of course, loved those early Flash Gordon episodes and never tired of viewing the adventures of Flash and Ming the Merciless. In an earlier post I showcased the original art where Frank was showing Williamson how to draw Flash and add zip-a-tone textures
While viewing the movie Frank sat down at Al's drawing board and started drawing a large version of Flash Gordon. He added a big monster and a shot of Dale in the background. Flash had his obligatory signature headpiece on, of course. Everyone thought that headpiece was extremely "cool". Frank brought the original back to his studio and did the final inking. This was in late 1950 or so. Later, Frank offered this piece to Steve Douglas, the art director at Famous Funnies that Al had introduced him to, for possible use as a Buster Crabbe Comics cover. Steve turned it down because he wanted shots of Buster Crabbe on the cover, not Flash Gordon. Frank threw the cover on top of his cabinet and there it stayed until many years later when a friend (Frank said it was Larry Ivie) grabbed a bunch of originals off the cabinet top and partially tore several pieces. Unfortunately, this FLASH cover got torn and is now missing a small portion of the monster's left wing. Frank never repaired it. He just left it. Many years after that Frank sold the original art to rock star Glenn Danzig. Glenn had it for many years before moving it to Hollywood writer and famous SEINFELD writer David Mandel. A number of years after that I was able to pry it from Dave's hands by offering a top quality Wattterson watercolor featuring Calvin and Hobbes. That watercolor originally was intended as a ROLLING STONE cover and it was traded from Watterson to comic historian Rick Marschall. I suspected that Rick traded him a Krazy Kat sunday for it. Luckily, it finally ended up in my hands.
I took the FLASH cover to Frank. He suggested that we simply cover up the torn area with a nice logo/stat. He told me what to do and I did it according to his directions. The cover is a huge 15x24 making it as large as the Weird Science Fantasy #29 cover, the largest of Frank's illustrations.
The other finished Flash Gordon illustration dates from 1976. I asked Frank its origin and he told me that it was just done for fun. I suspect that it was probably earmarked for the last Middle Earth portfolio, Woman Of The Ages, published in 1977. If anyone else has other info on this drawing I would love to hear it. I asked Frank about it several times and his answer was the same each time, namely, he did it for fun. Shortly after completing it, Frank gave it to his son, Billy. Short of cash, Billy reluctantly sold it many years later. It is a magnificent drawing with very energetic brushowork that pulses with life. The princess, of course, is sexy and sultry as only Frazetta can do it. Flash's finger touching her breast is an understated and very sensual touch to an already highly eroticized composition. I asked what the "F" stood for on the cod piece. Frank said it represented "Flash" and "Frazetta". He said that he couldn't just let Flash have all the fun with that girl! He wanted to be in on the action. That's Frank!
Frank ultimately drew precious few images of Flash Gordon. In the very early 50's he drew two pencil images of Buster Crabbe. One was partially watercolored. It was published as the back cover to one of the early WITZEND fanzines. The other was a simple head shot of Buster Crabbe. Both pieces were drawn with photo reference from well known stills from the first two FLASH GORDON serials. Later, he drew a wonderful sketch of Flash Gordon that was traded to Charlie Roberts. That sketch appeared on the cover of the infamous bootleg, Frazetta 300 Drawings, an effort of very poor quality. But, again, collectors and fans didn't care, we just wanted to see more and more Frazetta art.
(c) 2012 Doc Dave Winiewicz
Posted by DocDave at 6:26 AM 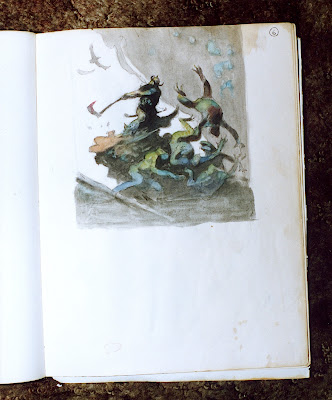 Here is a previously unseen Death Dealer study. Alex Acevedo bought most of the Death Dealer Studies from Frank in 1994, but he missed buying two of them. The other one is entitled "The Snow Queen" and it, also, has never been seen. Hopefully I can post an image of it in the near future.
I love the action of this study. It would have made an incredible finished oil. Unfortunately, the TOR Death Dealer novels came to their end and the money was no longer there, so Frank never finished those last two concepts. Frank did paint another unused concept in his final years depicting Death Dealer and a swarm of greenish vampiric witches/demons. He did it all left-handed. It was showcased in the museum for a very short while. The family still has it but it's never been seen and, alas, I don't have an image of the final oil.
DocDave Winiewicz
Posted by DocDave at 8:29 AM 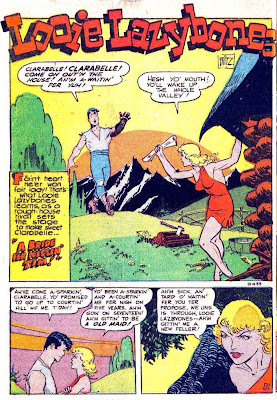 Here is the published version of that previously rejected splash from THRILLING COMICS #71. You can see the many differences. It is great to see that unpublished version however.
DocDave Winiewicz
Posted by DocDave at 7:49 AM