The Canaveral Pens of Frazetta

During my absence from this site I had an opportunity to look around in my files and storage boxes. I found some things I had completely forgotten about. This includes two pens that Frank used when drawing the famous Canaveral plates in 1963-1964.

The story starts in 1982 during a summer visit. Ellie was shopping and the kids were out of the house (some were still living at home during this time). Frank was looking for a sketchbook where he taught Roy Krenkel how to draw cats. He was frustrated in his efforts. This was before the new large studio was added to the rear of the house and everything was crammed into a very small studio space just off the living room. We went upstairs and Frank literally dove into the hall closet. He came out with several sketchbooks of varying sizes. We brought them downstairs and placed them on the dining room table. I always make a note of what is on the walls every time I visit. The walls were always changing. Today we were surrounded by a couple of Kubla  Khan plates, a Warren oil of the Lady with Scythe, the two page  Cindy is Saved comic book story, a Wally Wood robot illo, several Nina panels, and a large Krenkel cityscape of Old Aquilonia (which Frank received from Roy as a wedding gift). Frank quickly flipped through the books. One book contained two dipping pens/crow quills. Frank looked at them and started to ponder why they were there. He quickly remembered.  He told me that these were two of his favorite pens and that he used them to draw the Canaveral plates. He wanted to preserve them in case a special project came up. He completely forgot about them.  The sketchbook had a few pages containing very loose pencil/umber thumbnail studies for some of the later Canaveral drawings. Frank said that a lot of pens had nibs that fought him as he worked. They were scratchy and had a harsh feel in the hand. These, he said, were like oil being spread on glass….silky smooth. He used brushes as well, of course. But he said that brushes didn’t give him as much trouble as long as he bought good quality. Pens were just more finicky, he said. In later years Frank would constantly complain at the deterioration of quality in art materials, especially the paper and ink.

I was in stunned silence at the table. The  Canaverals have always been my all-time favorite Frazetta pieces. They are unmatched and glorious. Each one is a little piece of perfection. I have written about them extensively over the past  twenty five  years. Most people have never seen one in person. The three Frazetta Museums never had one on display. They are rare and highly coveted. It was a joy to discover and see these pens preserved by time and hidden upstairs. A pure serendipitous discovery.

After a few moments, Frank took a sip of coffee and simply tossed them at me. "Take them", he said. "Let me clean them up a bit for you." “Not a chance, Frank”, I quickly said. “I want that ink left on them for posterity. This is real history.” The tools of the greatest draftsman who ever lived. It takes ones breath away. I love that these pens have Frank’s fingerprints preserved in ink on the surface. They have all those wonderful marks of use all over the surface. The nibs are encrusted with dried ink. Just glorious. 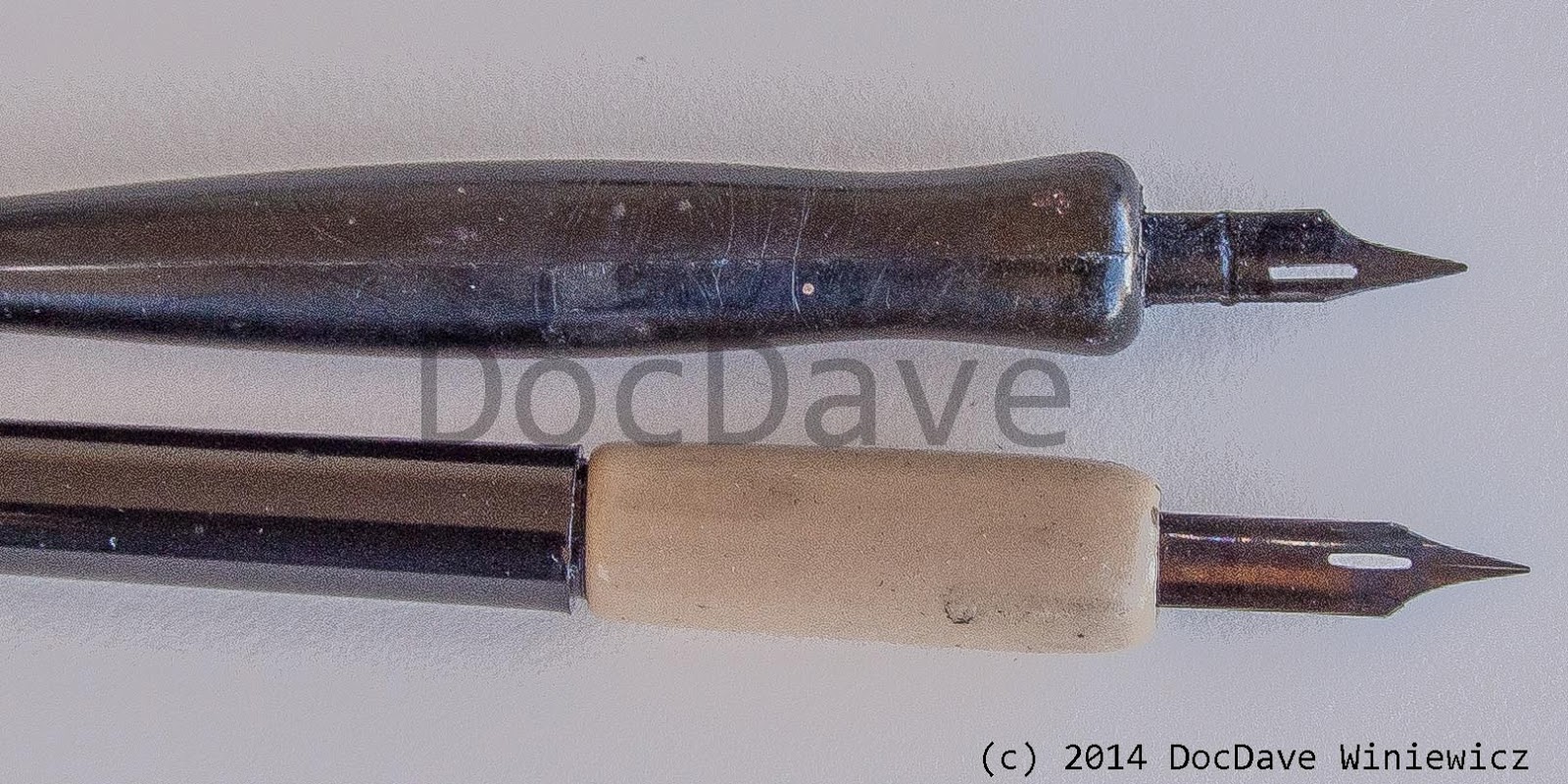 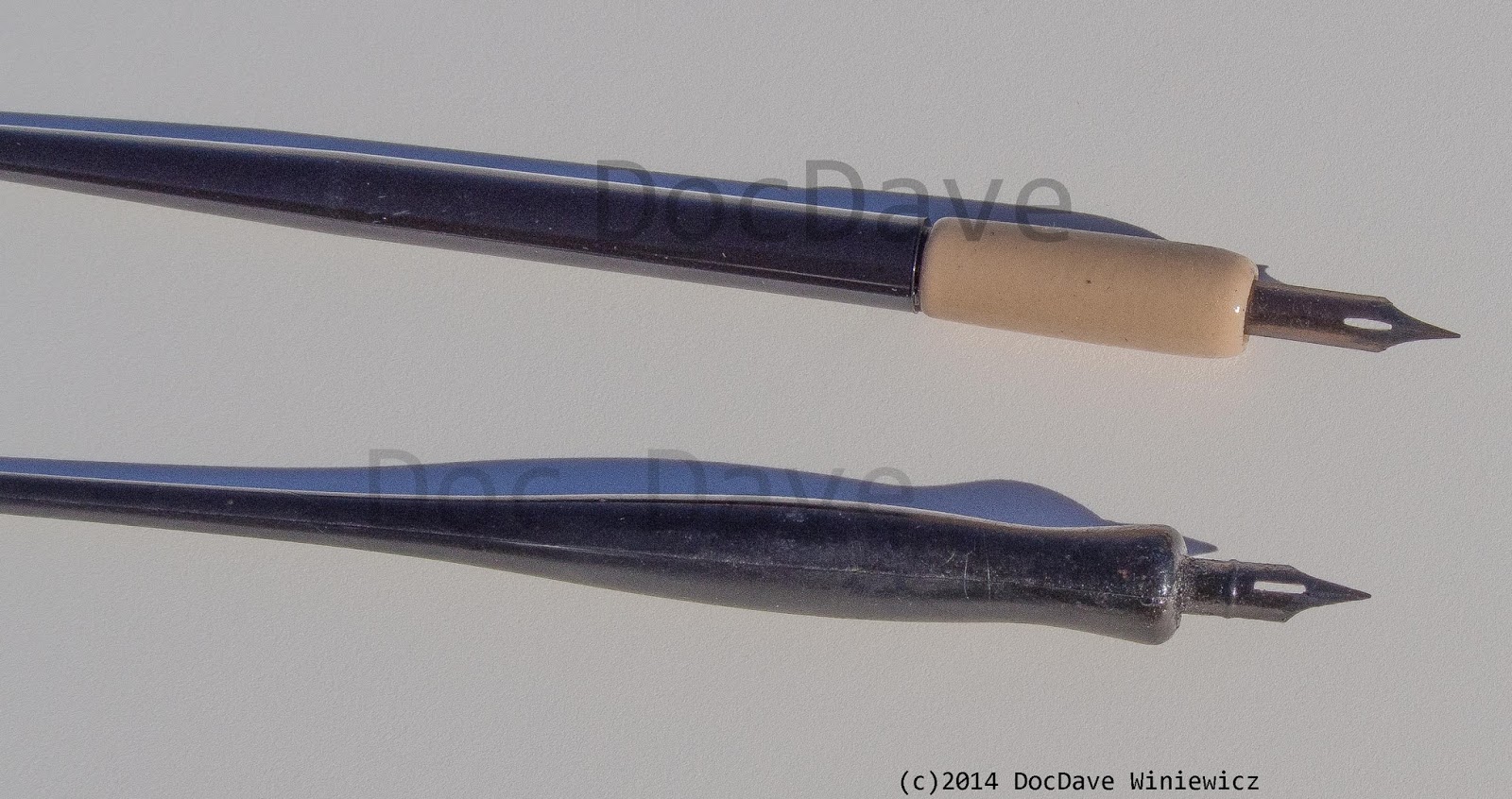 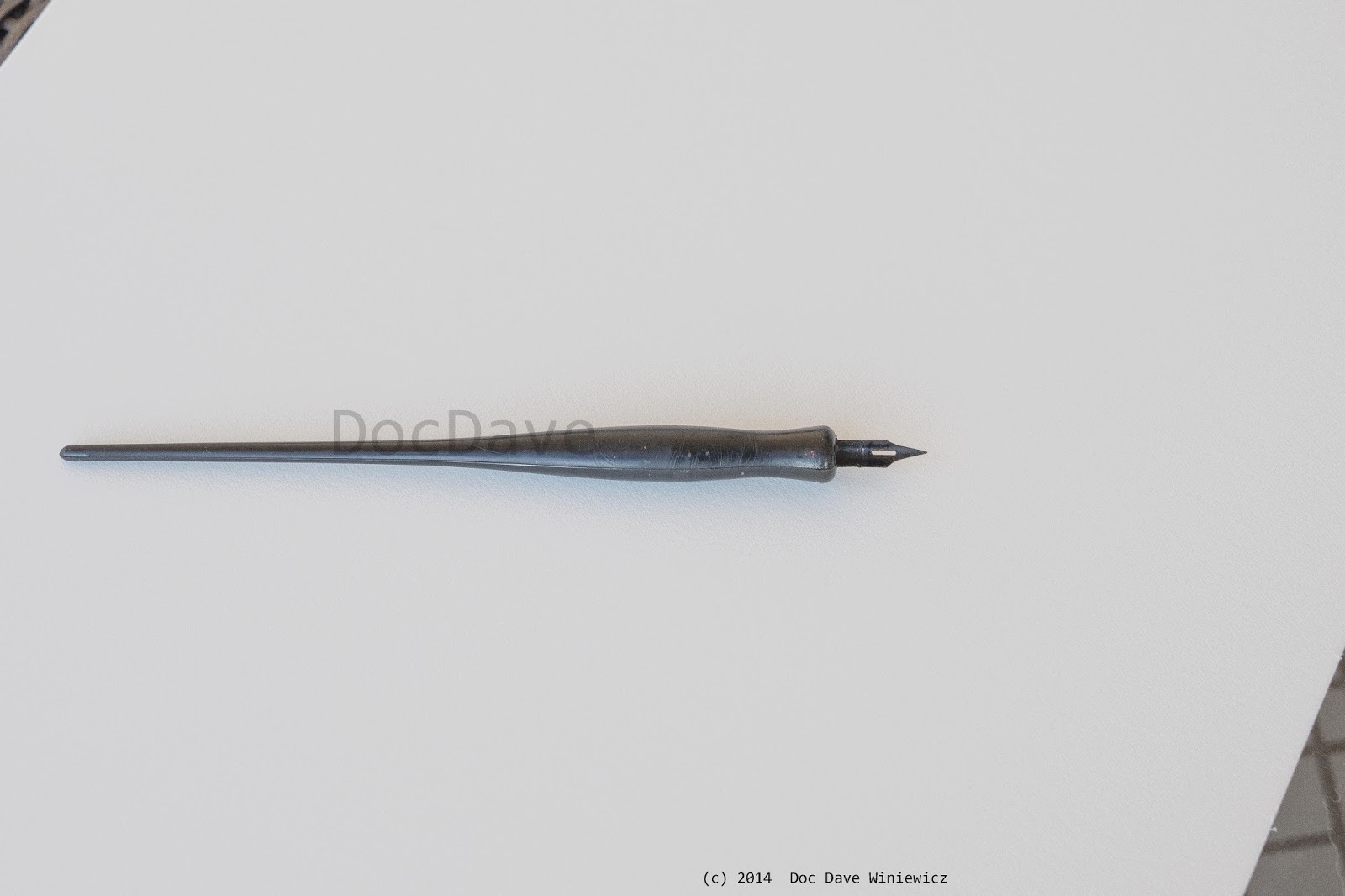 PS: Of course, careful readers are wondering if Frank found the sketchbook he was looking for. Yes, he did. It contained pages of Frank showing Roy how to draw a cat’s body, then his head, then his whiskers and ears. Very detailed. Roy’s efforts were on the adjoining page. The book also contained some quick Krenkel cityscapes. I believe one is included in Frank Junior’s book, but it is improperly credited to Frank. It is a Krenkel. Another sketchbook was loaded with pencil studies for the Lord Of The Rings plates. There was a great scene with Smaug the dragon that never made it as a finished plate, just an unused idea. Where is all this stuff now?
Posted by DocDave at 11:09 AM