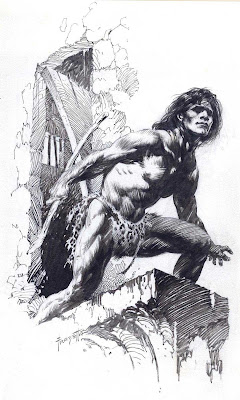 The cover art is, of course, a marvel of texture, action, and seamless design. A book could be written on the qualities of the cover art. However, in this essay I want to focus on one of the interior illustrations. The interior image depicting the simple image of Tarzan is a great example of the dynamism that Frazetta can infuse into a seemingly static pose. Static? Hardly. The figure of Tarzan explodes with life; it is made effective by the subtle perspective that Frazetta employs in the design. The viewer is looking up at Tarzan, who is in a state of dramatic expectation, ready to spring into motion. The eye and mind are captured immediately by this imposing figure. The attendant details are spare and beautifully observed. The surface rock, the room’s interior, the dislodged door, the iron bars in the window, and the suggestions of jungle moss on the protruding ledge all combine to give the figure a visual context and engage the imagination. This is not a cartoon; this is reality. We are living in this world directly. Most artists would kill to be able to establish such a direction connection with the viewer. It is a magical gift and one that takes us right into the mysterious heart of creativity. Notice how the direction of the rendering lines in the ledge is synchronized with Tarzan’s leg. This gives a visual thrust to the composition and enlivens it. This visual thrust energizes the composition and provides the doorway to the palpable life and vigor that one feels. Even the lovely signature is drawn on the bias to blend into the design. Look carefully at that signature. It, also, seems to have a life of its own. The body of Tarzan is beautifully rendered. The symphony of lines defining the body all appear magically harmonized. Nothing is out of place; nothing misleads the eye. Perfection. Even the ragged loincloth has a superb texture that reinforces the overall tactility of the image. The majesty of the face is carved against the sky with a look of utter intensity. Frazetta couches the eyes in shadow, adding to the wondrous mystery of the image. The image is sculptural, 3-dimensional in its impact. The seeming simplicity of this drawing belies the astounding brilliance of its creation. It is no wonder that this drawing was featured prominently in the Frazetta Documentary “Painting With Fire”. It was also the first Canaveral Press drawing seen in the ICON Frazetta art book published by Fenner/Underwood.

Nothing is ever static in Frazetta’s world. He wants the viewer to be “there”, to feel the excitement and danger and mystery in any scene. At the same time, Frazetta wants the inherent beauty, the awe, and the spontaneous joy in these designs to be felt. This is an incredible example of that approach.