Frazetta And The Creative Process 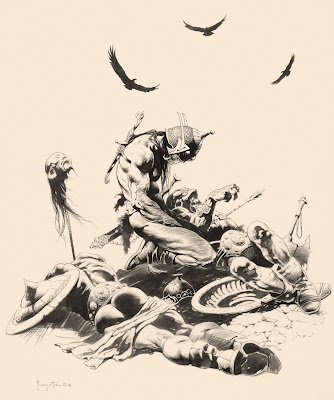 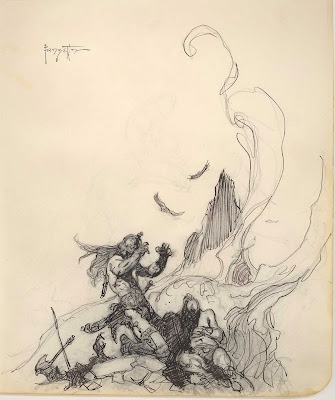 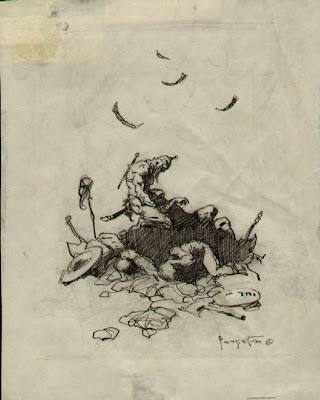 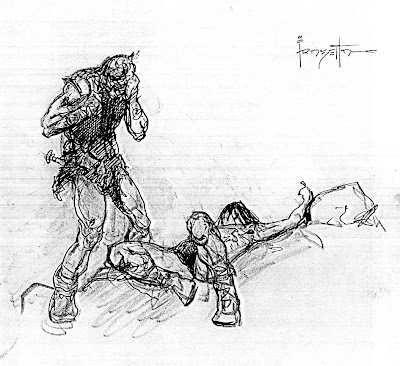 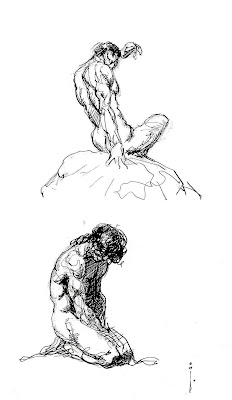 Frank’s approach to art is so intuitive and natural that it takes very little for him to get a mental grasp of the essence of a scene. He “sees” the result with an act of intuition and gets it drawn or painted as soon as possible. He doesn’t like to over-intellectualize the process. There are exceptions to this rule, however.

One of those exceptions is the famous “death scene” from the 1977 KUBLA KHAN portfolio. Most of the plates were drawn in 1975, with the cover image being added in 1977. Frank was giving a great deal of thought to the composition of the scene. He wanted to maximize the emotional impact. He did a series of quick sketches to try and get a clear visual grasp of what he was searching for. I have depicted all these studies. It is easy to see the progression of Frank's thought. He starts with ideas that are overtly histrionic and obvious. The mind starts with the obvious visual clichés. He wants something better. Less is more. He wants to reduce any dramatic gesturing and replace it with a scene that smolders with emotion. By spending a little more time “thinking into” the scene Frank has succeeded in creating a world-class illustration that showcases one of the key aspects of the human condition. The human soul shrinks and shrivels in a state of profound grief. The great warrior is brought to his knees with the death of his friend. His mighty arm is distended with emotion. He is surrounded by carnage. Was it worth it? The mind and soul are immediately thrown into the scene with compassion and empathy. This is not a comic book cover with grand overblown gestures and false emotion; this is a serious work that showcases the human condition in all its mystery and profound melancholy. It just does not get much better than this.

Definitely one of his finest pieces.... thanks for sharing the interesting preliminary visual "thoughts".