Frazetta And The Golden Lion 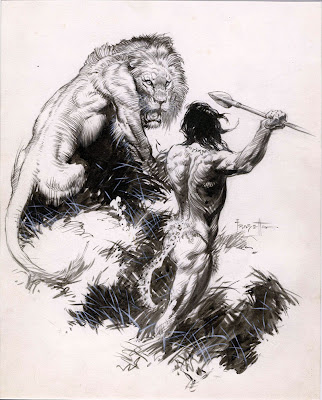 Frazetta reaches his highest creative pinnacle with the Canaveral Press drawings from 1962-1965. Frank was commissioned to illustrate several books by Edgar Rice Burroughs. Two books were published: TARZAN AT THE EARTH’S CORE (1962) and TARZAN AND THE CASTAWAYS (1965). Other books were planned but never published, although an edition of EDGAR RICE BURROUGHS: MASTER OF ADVENTURE by Richard Lupoff was published in 1965 with several Frazetta drawings. Frazetta executed a total of 27 full drawings and 5 small spot illustrations for this Canaveral Press series. Each drawing is a polished piece of highly sophisticated perfection. Frazetta was showing the world what he could do at a time when he wanted to establish a name for himself. Each drawing is a little miracle of power and refinement. The technique Frazetta employed in all these drawings is akin to the sumi-e inkwash paintings of the Japanese. These are drawings with a carefully controlled tonal range that varies from solid black to the lightest of water-thinned ink tones. Frank does this to control the level of contrast in the designs and to control carefully what the eye sees first and last. These drawings are highly prized and eagerly sought by collectors throughout the world.
The Canaveral plate of TARZAN AND THE GOLDEN LION is, in a word, a masterpiece. An aggressively defiant Tarzan confronts a savage lion that is turning to face his advances. The lion is regal, majestic, and bristling with life. His face is sublime. Frazetta never drew a better lion. One can almost feel the lion’s heavy breathing as he decides his course of action. Two absolute forces of nature rooted to the earth and preparing for a moment of electric confrontation. Tarzan is stridently heroic; his muscles are charged and prepared for action. Further atmosphere is established by the hot jungle breeze that swirls Tarzan’s hair and the lion’s mane. The composition is flawless. Frazetta employs a circular design to energize the viewer’s eye and to focus the mind’s attention. The thick grasses are applied in chiarascuro fashion to visually unite the two combatants. There is a yin-yang magnetism in this element that enchants the eye. Frazetta’s virtuosity is further displayed with the shortened and suggested spear. A complete spear would have punctured the design and destroyed the wonderfully-contrived symmetries. Notice how the lion’s tail and Tarzan’s loincloth mirror themselves and serve to tighten and unite the main elements of the design. Circular rhythms are everywhere present. With these “touches” Frazetta is able to take a seemingly static scene and supercharge it with life and vitality. Beauty speaks through the brush of Frazetta. We revel in it. Art of this quality really transcends the category of “illustration”; it is Fine Art of the highest creative achievement. Rarely do examples from this period enter the marketplace. History will prove that these drawings are an American treasure. In the words of Frazetta: “I knew they were priceless when I was drawing them.”

Frazetta could do it all. Whether it was pushing paint, or a pen and brush, whether it's comic books, cartoons, or realistic detailed paintings - he brought it all to life.

Thanks for showing this piece, it's really magnificent. You do tease a little though, you can't say he did 27 drawings for this book without showing all 27. I mean c'mon!

You and Arnie, and the Fritz's should get to gether and put out all 27 in a portfolio!