Frazetta And Conan The Destroyer 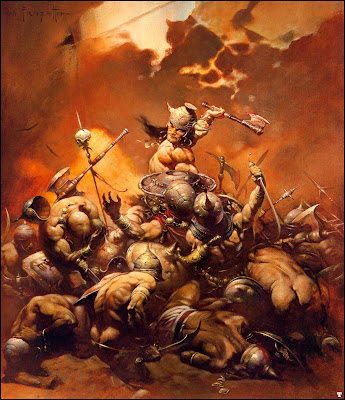 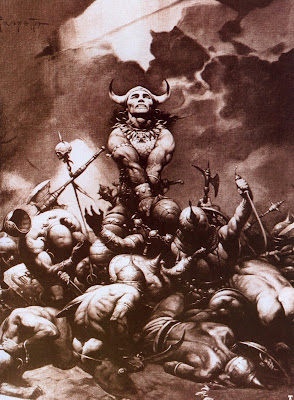 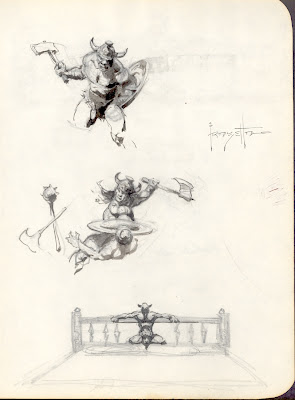 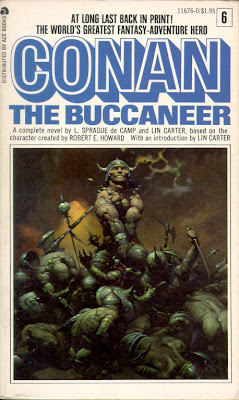 One of the constant discussions I would have with Frank concerned the subject of his repainting canvases instead of starting a new oil. Frank would say that if he was dissatisfied with an image, then why not replace it with an image which most clearly reflects his intention. Indeed, it is tough to argue with that. He is the artist and the creator of the image. The fact is that some of repaints worked and some did not. I loved the original versions of Conan The Buccaneer and I was very distressed when Frank changed the basic concept. I have grown to really like the current version and I realize why Frank wanted the changes. First of all, it was too derivative of the scene of Tarzan battling the natives in the Canaveral plate. Also, Frank said that he wanted to give Conan a fighting chance in battle. An axe is more firepower than bare hands, especially when all the other warriors are heavily armed. A little known fact is that the original idea for Conan the Buccaneer was for a wraparound paperback cover. The idea of Conan as a buccaneer steered Frank to consider ideas with a nautical theme. Frank drew several watercolors depicting Conan battling a sea monster in a roaring sea. It was ultimately decided that there would not be a wraparound and Conan’s face would have to be shown. The savage sea ideas had Conan looking into the sea and storm and away from the viewer. We discovered these studies in a notebook hidden in the back of an upstairs closet. Frank had completely forgotten about them.
Frank then started work on the “pile of bodies” idea. That oil went through a number of different versions. Frank was constantly fiddling with the style of Conan’s helmet and his ornamentation. Photos exist of all these stages.
This final sketch sheet depicts the decision Frank made in changing the overall thrust of Conan's character in the design. This made the transition complete from Conan the Buccaneer to CONAN THE DESTROYER! The wash drawings are gorgeous little studies. It shows that Frank had a pretty clear conception of the visual direction he wanted to achieve. He talks about these studies in a section of the Frazetta documentary PAINTING WITH FIRE. The studies were previously published in the Howard volume THE ULTIMATE TRIUMPH as well.
The other image depicts an idea for a bed headboard that Frank was thinking about. The reverse of the sheet contains more very explicit studies for this erotic headboard.
Instead of mounting this large dildo-type apparatus on the bed, Frank decided to carve penis and vagina designs into the bed. Interesting that Frank’s mind would immediately turn to sexual themes after drawing those Conan studies. Obviously, Robert E Howard was able to get Frank’s blood boiling a bit!
DocDave Winiewicz ©2010
Posted by docdaveat 10:33 AM

Dave--More wonderful "gems". I am always intrigued by the evolution of Frank's work: from its initial inspiration to final form. These prelims privide indispensible glimpses into Fritz's creative process, and anything Conan-related, especially so. Thanks, again! Tony A.

Funny, I always thought one of the "lies" Frank complained about in the newsweek article in the 1970s (or was it esquire?) was the idea that he had carved naughty bits into his bedposts.

Guess the protests were all about protecting the image, eh? Silly.

I really like the final copy much better the original, though I would rather Frank have painted a new copy, rather than painting over the old. How many paintings were later "enhanced"? I am not sure how I feel about the Death Dealer changes.

I really like the final copy much better the original, though I would rather Frank have painted a new copy, rather than painting over the old. How many paintings were later "enhanced"? I am not sure how I feel about the Death Dealer changes.