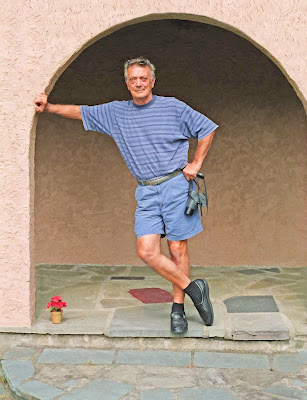 Many years ago I had a very famous professor in graduate school named Marshall McLuhan. He was the head of the department of cultural symbolism. Woody Allen asked him to appear in one of his movies and play himself. McLuhan taught that the most powerful invention of the twentieth century was the Gallup poll. It changed the nature of politics and foreshadowed the dominant role that media would play in society. It literally obliterated the presence of statesmanship in political leaders. Decisions were now made based on polls, not on personal vision and integrity. This led to the rise of celebrity, the supreme triumph of form over content, of gloss over character.
Now add to this the nonstop ultra-accelerating roll of technology and its' deeper insertion into private life. Media and communication dominate our private spaces and add an element of continual aural and visual cacophony into our lives at almost every minute. The computer, the radio, the iPod, the TV, and the cell phone define the nature of human communication.
Everyone is constantly talking, texting, and responding to electronic prompts and queries of all sorts. Again, there is a lot of action, but very little significant content. Very little significance at all.
The ultimate result of all this is that reality becomes diminished. The nature of the present moment, the "now" we all live in, is severely devalued, strongly diminished. The world becomes desaturated. It becomes an unseen backdrop while trivial texts and vapid phone calls are furiously made. Trivia becomes the greatest priority, the highest value. I was on a hiking trail in the grand canyon recently and in the midst of truly awesome beauty I saw a young girl obliviously texting away as she walked with her parents. How sad. That same girl was probably texting how awesome her boyfriend was, or how amazing her new shoes were. In this diminished environment language and words lose their special qualities. If awesome can be used to describe shoes or a shirt, then what words can be applied to the grand canyon? Language becomes devalued and loses its' magical power to describe reality. Can novelists and poets survive in this arena of verbal devaluation.
When an artist enters this modern world of heavily adulterated reality, how does it affect his work? The impact is significant. It becomes almost impossible to overcome all the verbal and visual sludge that is heaped on the sensorium every minute of every day. Creative work largely becomes derivative, devoid of genuine vision and originality. We are presented with hundreds of thousands of recycled images and themes. Stereotypes abound, cliches become the accepted norm. Cultural conditions profoundly affect the possibilities and pathways to creation. Many extreme limitations are present that are not seen and completely unfelt, yet they are affecting everything that is done. How is it possible to establish a direct connection to the sources of creativity when all of society makes that connection almost impossible to make. These invisible roadblocks rob the purity and force from language and undermine the possibility for any real truth to appear. Truth is a victim in the internet age. It simply does not exist. Everything is relative; everything is controlled by a pathetic multiculturalism and perverted political correctness. The Judeo-Christian traditions that established the western world are now replaced by the new "Great Tradition" of popular culture. We have lost the world.
I argue that Frank Frazetta was the last artist, the last artist who represents the grand tradition of art that dates back to the caves of Lascaux. There is a direct line that can be traced from those caves to mediaeval cathedrals, to DaVinci, Raphael, the Sistine Chapel, to Rembrandt, Shakespeare, Charles Dickens, Vermeer and, finally, to Frank Frazetta. He grew up before the domination of television, before the thundering explosion of technological interference in our quiet moments. His greatest works were created deep in the night accompanied by the rich strains of classical composers. On occasion he would paint with the silken voice of Sinatra filling the room. His soul opened, his creative flow unleashed. The truly magical results were able to touch the world and enhance hundreds of thousands of lives. When Frank sat down to paint or draw the heavens would open and all the angels gathered to watch. He was gifted and this gift was allowed to grow. He became an original and a powerful presence in everyone's visual universe. Thank God that this incredible child prodigy was not sent off to design greeting cards, or work for the gas company (as his father wanted). I would argue that the most powerful influence in Frank's life was not Roy Krenkel, or Al Williamson, or any of his teachers; it was his grandmother. She gave him the early reinforcement and love. She placed him on the pathway to recognize his gift and to pursue it. Her encouragement fortified his soul and gave him confidence. She created the conditions for Frank's imagination to grow. The result is that the world was presented with an artistic genius...the last of his kind.
Dr. Dave Winiewicz (c) 2010
PS: Let me be clear about my intentions in this essay. I did not want to demean or disparage any artist trying to find his path. I wanted to point out the almost insurmountable difficulties present in attaining the heights Frank attained. It can be done, but with redoubled effort and great gifts included.
Frank acts as a beacon and bright light for all creative efforts. They will continue and they should continue. Frank has provided the example and the inspiration.
Posted by docdaveat 7:44 PM

It's true Dave. Frank was the last, but where the man has ended, the art continues. I can't help but smile when I think of all the future generations of impressionable young teens that will have the excitement of discovering Frazetta all over again.

He may be missed for years to come, but he's made sure that he'll never be forgotten.

This has been very enjoyable reading.

I see Frazetta as a Romanticist... someone for whom classicism is but the first step towards expression (my definition). I don't think Romanticism will ever die, but it does hibernate for periods of time until its principles are rediscovered by those who can appreciate their profundity and power.

Depth of style can only spring from a deepening of our emotional life. That is what we really demand and look for!

There's a real task on our hands, Andy. Modern art critics and their supine followers like the flat and the shallow. They like it as they like soft drinks and factory-made bread."

Hi Doc Dave, no offence here I know exactly what you mean. In the last couple of years I've been somewhat disillusioned with the direction things are going.

To be honest even Franks work can be a crutch. It shows us what we can achieve but also our failings. Sometimes when I sit there I want to create something like Frazetta did, capture an action or gesture only to find that so much of his work is burned in my head that it's hard to find something original. When you do, you wonder if you should because it feels like your swiping or trying to be an imitator, or worrying that someone else will judge you as a wannabe hack.

The next problem is that there is so much Stuff out there. People just don't appreciate the time and practice, the effort that goes into any classical traditional art. Not with the deluge of fantasy oriented digital work out there with, copy, paste and infinite undo’s. On the internet my work doesn't really stand out. It's only when people come to visit my home and see the originals on the walls that you see a real interest in the painting and what goes into producing it.

Try getting your work into a gallery around here and if it's not landscape or typical modernist monstrosity where the artist doesn't even have a basic understanding of colour and composition to build their work on but instead leaves a nonsensical rambling essay that essentially has no meaning. The whole thing can be quite disillusioning.

I spent most of the last 15 years making 3d games but recently with the support of my wife have started painting again. I don't know what the future holds and sometimes I feel like you, that Frazetta is a part of a last generation of artists the likes of which we may never see again.

With today’s digital age and ethos of instant gratification I worry about the future. I'm a product of this modern world but hope maybe I can find the courage to stand against it and maybe produce a few gems of my own. I still don't have a cell phone or TV package but am still very much a slave to the internet. I hope someday my work make some kind of a dent that will last the test of time.

After my previous reply I realized that actually the internet can be a great asset to artists. As a illustration student in the early 90's before the web took off there was almost no practical instruction only ideas based courses.

Today, things haven't changed that much, only now we have the internet and a wealth of information that has been lost to most people these past 50, 60 years.

If you want to discover the techniques of masters from previous centuries you can, there are forums that cater to people with an interest in learning the methods that Frank probably was trained in by Michael Falanga. Even atelier schools that still teach in the traditional way. Though I expect they would frown if they learnt your ambitions lie in the realm of fantasy :)

Not that there wouldn't be huge hurdles in achieving anywhere close to what Frazetta did in his lifetime.