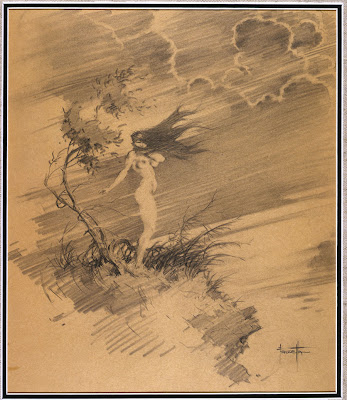 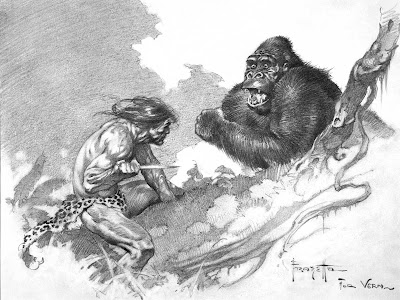 Actually, Frazetta does not own any magic pencils, but there is plenty of magic in his pencil original art. Frazetta has always maintained that the pencil was his favorite media. He said that it’s the easiest to use, easiest to control, and wonderful effects can be obtained rather effortlessly. Anyone who has seen his pencil originals will attest to the breathtaking qualities that they possess. I would like to comment on my two favorite pencil originals.

WINDBLOWN is a work that was executed in the early 1950’s. It was drawn spontaneously at the kitchen table while Frazetta was talking to Roy Krenkel, his longtime friend. The piece was drawn on cheap brown art paper from a standard sketchbook. WINDBLOWN is the result of creative daydreaming and a little showing-off. Roy was always in awe of Frazetta’s abilities and took constant delight in watching Frank create something new. In this instance, Frazetta was obviously feeding off Krenkel’s enthusiasm and produced an incredible work. It is also a work that introduces the viewer to an important aspect of Frazetta’s psyche. A single nude woman is on a precipice and a storm is gathering. The entire composition stitches together the elemental powers of creation: wind, sky, earth, and female mystery. Frazetta is presenting the essence of the female. All the visual elements of the landscape are carefully synchronized: the dark storm clouds, the flowing grasses, the bending tree, the excited leaves, and the jutting rock promontory. Squarely centered within this turbulence is a solo female figure, seemingly unapproachable in that perilous location. She gathers together all these earthly forces and resonates with her peculiar energy. The curves of her body are beautifully proportioned, flowing, natural. Her hair is wildly mixed with the wind. She is one with nature; she is a natural force in her own right. A virtuoso orchestration of delicate lines gives her body a rich, erotic texture. The eye can feel all these tactile presences. The explosiveness of her body’s raw sensual energy displays a half-hidden face as a mysterious counterpoint. She exposes everything to us but her “self”. Amazing. Everything in this composition flows and moves and captivates. What is Frazetta saying in these visual gestures? The power of woman is universal, cosmic, yet dangerous. Can a woman ever be really known by man or does her nature provide a barrier. She seduces and, yet, remains hidden from our penetrating gaze. This original is almost mystical in its deep impact. Once we behold it, it remains with us and continues to send a challenge to the imagination. It is Frank Frazetta’s tribute to the female and the answer to those who maintain that his work is sexist and anti-female. Nothing could be further from the truth.


The other great Frazetta pencil comes from the year 1967. While visiting the home of long-time Burroughs collector Vern Coriell (founder of the Burroughs Bibliophiles), Frazetta executed a drawing of Tarzan and Bolgani; it was given to Vern as a gift. Quite a gift! It is the finest pencil drawing ever created by Frazetta. I suspect that Frank’s competitive nature came into play in creating this illustration. Frazetta was surrounded by Burroughs fans, a very ardent breed, and also surrounded by Vern’s magnificent collection of original art, including Foster, St. John, Matania, and others. Not to be outdone, Frank showed them what he could do. The result is one of the two best Burroughs drawings ever produced (the other being the Canaveral Press ink drawing of Tarzan rising out of the group of natives).
The original art is eye-popping. Frazetta caught a moment, a moment encompassing life and death, an electric moment heavily pregnant with the implications of future action. Simple illustration, fine art, and high art merge in the creative excellence of this piece. Tarzan is straddling a large limb, symbolizing the barrier that exists between raw animality and humanity. Tarzan is explosively poised to confront the beast in its own realm, the jungle. I know of few other works that so completely capture the essence of the ape-man. Bolgani is equally well presented: wild, primal, seething, uncontrolled. His face is savage, noble, and terrifying. Tarzan confronts Bolgani; ape-man confronts savage beast. On another level, man is confronting his hidden nature, that part which has been tamed, domesticated, and civilized. Here, it is all on the surface; nothing is hidden. A moment of life and death confrontation against a backdrop of obscure and dark mystery. The natural expressive gesture of man and beast is perfectly captured, flawless in execution. Like WINDBLOWN this drawing is nothing less than elemental in its scope, a microcosm of the human soul and its contradictions, repressions, and passions. The picture is not just dynamic, it ROARS with life. It is an unqualified masterpiece, a masterpiece of courage, dignity, and valor against a background of dark death. Frazetta has never been better.

awesome, can't wait to read more, thanks for starting this!

Can you tell me if Windblown is reproduced in any of the Frazetta books out there, and who is in possession of the original-is it in his museum? And thank you for the wonderful insight to this truly remarkable work!

I own it. It was published in one of the Underwood books.