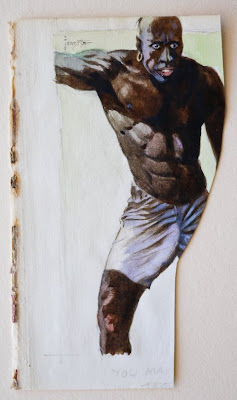 In 1994 Alex Acevedo (from the Alexander Gallery in NYC) purchased the large 1962-1964 sketchbook from Frazetta. Part of that book included the famous Porno story called "The Adventures Of Toolonga". It was a multiple-page story which Frank enjoyed showing to select friends and guests. The story is sensational...explicitly sexual, erotically charged, and beautifully drawn in pencil and delicate watercolor tints. Frank did not want the story sold with the book and he told Alex that he would remove the remaining pages (some were already loose from the book) before selling the bulk of the sketch book. Alex said that he had to have a "piece" of that story or there would be no deal. Frazetta carefully clipped out the first panel of the story and removed the standing image of Toolonga (pictured above). The remaining image shows a beautiful blonde answering the door and meeting Toolonga for the first time. Frank signed the nude image and gave it to Alex. After the deal was concluded and Alex left, the little watercolored image of Toolonga was on the table. Frank asked: "I suppose you want that?" Of course I do! Frank added a small signature and Frank told me to put it in my shirt pocket so that Ellie wouldn't see it.
© 2010 DocDave Winiewicz
Posted by docdaveat 10:22 AM

Are there any visual records of this story in existance ? I had heard that Frazetta destroyed the originals not too long ago before he passed away.Damn shame.

The story does exist.

Pardon my blunt remark but from your blogs here and hints in different previous writings by others elsewhere [plus the PAINTING WITH FIRE dvd evidence] the late Mrs. Frazetta appeared to be not the most desired company or benevolent person. Never met her nor her incomparable husband but I strongly feel that she actually lacked basic respect for him and for his greatness beyond the lowest moneygrabbing opportunities concerning his artwork. I don't doubt this story with the 'hide the drawing in your pocket' detail nor the one where she serves the lunch to Mr. Frazetta and nags him for not churning out abstract paintings, ruining him his meal and your socializing with him... According to that, I'm prone not to doubt the fact that she really kept the keys for the Frazetta museum not allowing Mr. Frazetta on his own inside it.
It beggars belief...
Sorry for being honest, apologies if I have offended you.

No offense taken. I thank you for the comments. Ellie was a very "complicated" woman. I plan to write much more about her in a future balanced and objective essay that deals with all her strengths and foibles. It will be interesting to see how history treats her in the future.
Thanks again.