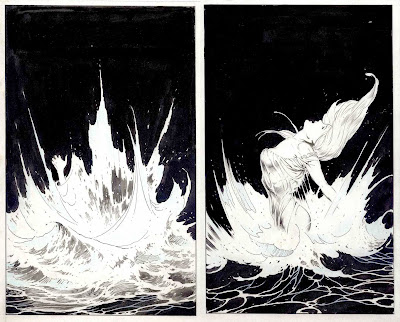 Frazetta drew a couple of sunday pages in 1950 or 1951 as spec work in an effort to secure a job as a strip artist. It was to be titled NINA. A complete sunday example is published in the new Vanguard JOHNNY COMET volume. It was first published in the LIVING LEGEND paperback volume in 1981. Other individual panels have appeared in various places.

This two panel sequence has never been seen. It is spectacular. Frank poured his soul into these pages and the quality is simply stunning. The subject matter was perfectly suited to Frank's abilities and interests. Frank's art had reached a new level of excellence. There was no one else around at this time that could produce work of this quality. Frank was pulling away from the pack and all his friends were aware of it. The strip art business was a very tough one to break into. It was a year later that Frank landed the JOHNNY COMET strip. We can only dream about what Frazetta would have accomplished if the NINA strip had been accepted.

DocDave Winiewicz
All art, of course, is (c) Frazetta Estate 2011
Posted by DocDave at 9:35 AM