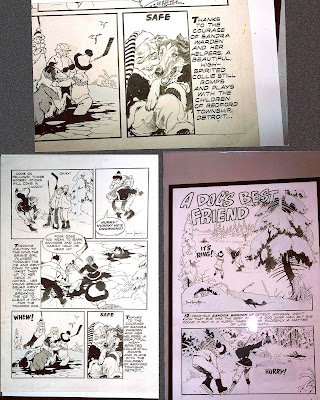 Previously unpublished and seen in its entirety for the very first time. I put this story back together many, many years ago. I bought the splash from a Russ Cochran auction, and found page two in a Guernsey's auction several years later. This is the last interior comic book story drawn by Frank. It was supposed to run right after the CINDY IS SAVED story that I posted earlier.
I brought it down to Frank to have him sign the second page. He did. When he finished, he raised a partially wet coffee cup to take a sip and, of course, two big drops of water slid off the bottom of the cup and directly hit the partially wet signature. Such is fate, eh? Frank commented that he was relieved that coffee drops didn't hit it. He said: "Let's leave it. If I try to fix it, it will smudge. You got yourself another Frazetta story, Dave."
Actually, the smudged signature bothered the hell out of me. Frank decided he wanted to get the story back and offered me a trade for the nude bathing girl watercolor from 1962. I jumped at it.
The splash page originally had a big stain right in the middle of the page. It required a $1200 conservation job to remove it. Page two had several paste-overs covering some minor flaws. All in all, the inking and energy in these pages is pure Frazetta magic.
(c)2011 DocDave Winiewicz
Posted by DocDave at 7:14 AM