Frazetta: The Closet and Cabinet 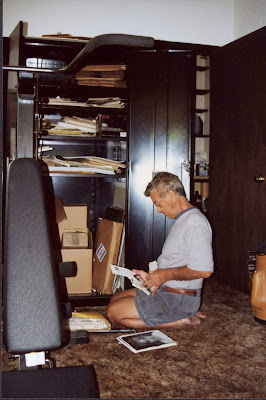 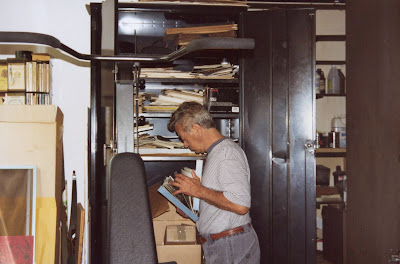 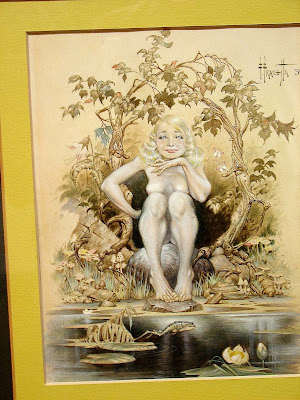 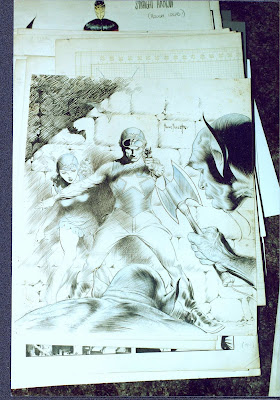 Before the opening of the first Frazetta Museum it was a real treat to visit the Frazetta home in Marshall's Creek, Pennsylvania. The home was a treasure trove of original art. Art was everywhere. Oils on every wall and more oils stacked in cabinets and bedrooms. It was impossible to be anywhere in the house without seeing some incredible Frazetta original staring back at you. Even the two bathrooms were filled with drawings and watercolors. Before the final major expansion to the house Frank only had a small studio off the family room. There was a darkroom, an easel, and a large metal cabinet. The cabinet was stuffed with boxes of photos, sketchbooks, cameras, prints, magazines, and two oversize sketchbooks containing Frank's pornographic stories. They were always available for Frank to show to his closest friends. I never missed a chance to look at them.

During this very early visit I asked Frank where the Famous Funnies covers were. "They are probably upstairs. Ellie has the art hidden away everywhere. Do you want to see them?" Yes, of course, I did. Off we marched upstairs. Frank stopped in the upstairs hallway and opened the hall closet door. "Look in there..on the floor..in the back. Pull it all out." I knelt down and literally dove headfirst into the closet. There was a big stack of art in the back and I pulled it out and dragged it into the hallway. Frank and I kneeled. I was stunned; I could feel a giant thrill shoot through my body. It was a two-foot stack of art before me. On the very top was an assortment of combat comic art pages. I started to look through the wondrous pile. Wonder after wonder appeared. Frank said it was too dark to see the art so we pulled the art pile into the nearby bedroom. There was a strong shaft of light coming through the window and Frank put the art right into the sunshine. I turned over some early Snowman splash pages and my heart stopped. Appearing before my eyes was the unbelievable Canaveral cover to Tarzan And The Castaways. It was glistening in the sun. I was literally floored by the impact of the art. This was followed by the Tarzan At The Earth's Core cover and the Canaveral depicting the tiger in the high grass. Frank was sitting back and lighting a cigarette. He was watching me enjoy the art and listened to all my comments. This was an experience that I would never forget. I asked Frank if I could take a quick picture. Frank ran downstairs to get my camera. I took a shot of the Famous Funnies cover. I have added that shot to my essay. Amazingly, to this day, that cover has NEVER been published in all its blue pencil and tonal glory. What a genuine pity that so much art has never been seen or published. Now, much of it has been scattered to the closets and walls of new collectors. It will be an impossible task to retrieve the imagery. What a waste.

I continued hunting through the art. I came across the Weird Science Fantasy #29 cover. I told Frank that many of these things needed to be framed or, at least, protected. I told him that I considered them better than a lot of the oils. Frank said: "Really? You really think so?" I said: "Frank, there is no doubt about it. No doubt at all. You are the best when it comes to pen and ink." Frank smiled and blew out some cigarette smoke. The smoke fell on the pile of art. I gave Frank a pained and solemn look. He gave me a little smirk. His eyes twinkled in the sunshine.

The next things I looked at were a few torn Came The Dawn half pages. Frank said that one of his "fans" ripped them when pulling down some art from the top of his cabinet. I inquired about the ripped pieces and Frank said they were gone. All the romance comic book stories were in the pile, as well as page upon page from the THUNDA book. The pile also contained all the Middle Earth portfolio plates. I couldn't devote enough time to them. I was overwhelmed. I was visually exhausted. I came across the early TIGA strips. All of them were there. I remember those strips from their first publication in an early Squa Tront fanzine. I always found the art to be charming and a strong foreshadowing of greatness to come. Frank picked up the #3 strip that featured a nice close-up of the female's face. "Not bad, is it?" Frank said. He went on to comment on the girl's face. "If you look at my art and see a nice face, that means I was having fun doing the art. I spent a lot of time on some of those faces. Look at some of those romance stories I did. There's some really good work in those. I worked hard on them, but they were a lot of fun to draw."

There were some early watercolors in the pile. I was extremely impressed with the image of Frank’s girlfriend, Carol, who was a ballet dancer. The piece was published in b/w in the LIVING LEGEND book. It’s never been published in color. I had to take a shot. It was in a very crappy, acidic yellow mat. Again, what a travesty. Frank commented that Carol was the great early love of his life, but he had to break it off because her parents were very biased against Italians. Frank was highly insulted when they kept referring to him as that low class Brooklyn wop. Frank said he came very close, more than once, to beating the crap out of her father. Frank further commented that his fixation on girl’s calves started with Carol. Here is the discussion as I remembered it in my notes:

DW: Frank, tell me a little about her.

FF: She was gorgeous, real class. A ballet dancer with an amazing body of great flexibility. I’ll never forget how smooth her skin was…like glass or porcelain. You know that phrase “smooth as silk”? Well, she was even smoother. I couldn’t keep my hands off her. I really flipped for her. The muscles in her legs drove me just nuts. I thought she was the one. I thought we’d be married.

FF: It was her parents. They just hated Italians..Italians for christ’s sake. They thought I was a nobody, another Brooklyn hustler. He insulted me more than once, right to my face. Any other guy I would have killed them. What? I dressed well and had a nice car. I spoke well. What the hell did they want? They wanted their daughter to marry a doctor, I guess. I wanted to beat the crap out of her father more than once. I couldn’t stand his arrogance. He hated everybody, Africans, Italians, Spanish, you name it.

DW: Where did this watercolor come from? Didn’t you add her name to a tree in one of your comic book pages?

DW: Were you upset?

FF: No, not really. There were plenty of fish in the sea and I just went back out fishing. I never had a problem getting girls.

That’s a little insight into the early Frazetta and his woman problems. Most of the time HE was the one trying to escape from girls coming after him too hard and too seriously.

By the way, the little frog jumping in the foreground comes directly from an early Prince Valiant by Hal Foster. Frank said he did it as a little tribute to the master.

I finally came to the last of the pile. There was so much there, both major and minor pieces. What an experience! That first look at that amazing pile of wonderment is something I’ll never forget. It was my very first look at many of these iconic productions. Many pieces still have not seen publication. What a joy it was. I was already looking forward to my next trip.