Frazetta, Coffee, and the Flying Cannoli 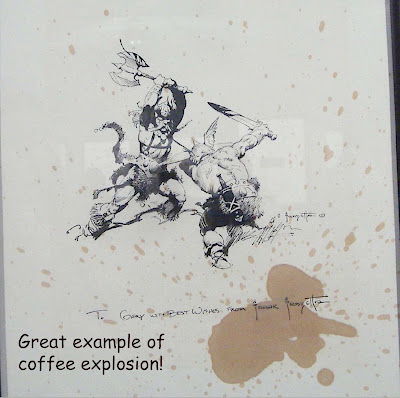 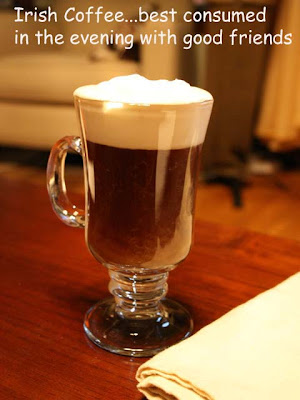 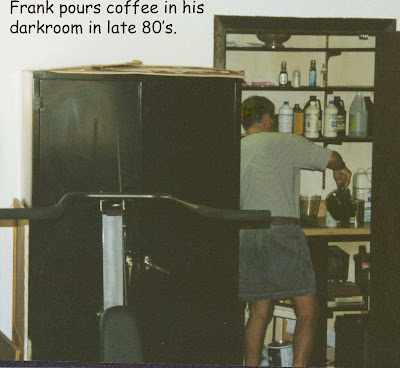 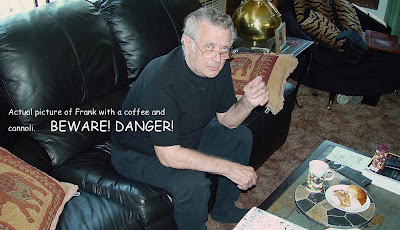 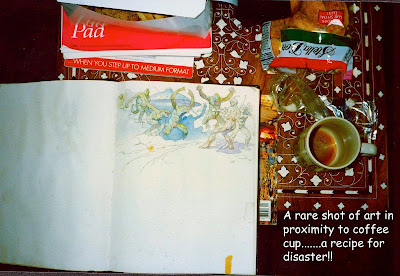 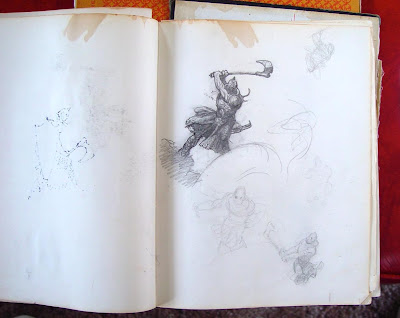 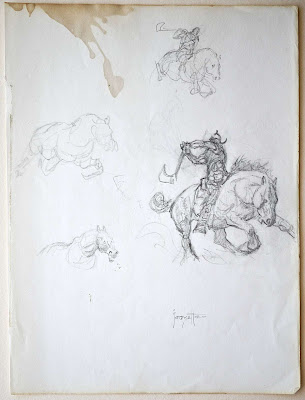 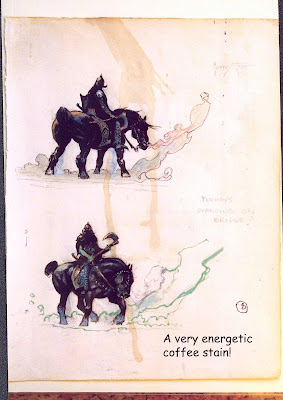 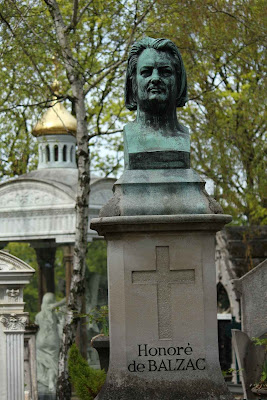 One of the great inside jokes about Frazetta is the many coffee stains that appear on his art. I have reproduced a few examples with this essay. The fact is that Frank Frazetta loves coffee and drinks it constantly. The greatest coffee drinker in history was the great French writer, Balzac, who consumed 50 cups a day. Balzac ultimately died of caffeine poisoning at the young age of 51. Frank had a similar coffee passion. Every visit to the Frazetta home always began with the question: "Want some coffee?" Everything else started after that first pour and first sip.

During a very early trip in the 80’s I pulled up to the Frazetta home driving a very low end, entry-level Mazda. Frank greeted me at the door. “You fit in that thing? What do you get, about 200 miles per gallon?” Frank continued to tease me and my pathetic little car. I responded: “Frank, if I didn’t spend every penny I have on Frazetta originals, then maybe I’d have some cash for a decent car!” Frank laughed. “Come on in, you need some coffee after being squished into that thing.” We walked into the kitchen. We were alone. I sat in the dining room and Frank poured some coffee. He started swearing because he couldn’t find any milk. Finally, after much fumbling around Frank reached into the back of the refrigerator and came out with a carton of heavy whipping cream. I was horrified. "Frank! What are you doing? That stuff will kill you. It’s pure cholesterol. It'll clog your arteries." Frank listened without looking at me. Then I saw him smirk. He then looked at me, patted me on the back, continued to pour the thick cream into my cup, and simply said: "For Christ's sake, live a little!" That's Frazetta.

That could almost be Frank’s motto, but we’d have to change it a bit to “LIVE A LOT!”

All of our best discussions and evenings involved some kind of coffee. Many times Ellie would bring us cup after cup of irish coffee. We would sit there, put an oil or drawing on the easel, and then just start talking about what we see. After a few Irish coffees Frank would often loosen up and start to talk about myriad things, i.e. his early girlfriends, his encounter with a UFO over Brooklyn, his real thoughts about God, his thoughts on people in his life, his unguarded thoughts on Ellie, and so many other things. Two friends just contemplating the world. Golden times, to be sure. One night Frank decided to give me his imitations of EVERY Li’l Abner character. It was hilarious. Another night we walked into woods and, out of nowhere, Frank would start to sing. Not many people know this but Frank had an extraordinary voice. He often would sing at weddings for relatives and friends.

I have seen Frazetta drip coffee, splash coffee, spill coffee and spit coffee. The worst event happened one day after Ellie brought in some cannoli and put them on the table. We were sitting on Frank’s zebra skin sofa and looking through a big box of photographs. The box was between us. Frank reached for the plate of cannoli to offer me one. He had a cup of coffee in his right hand. One of the creamy canoli started to roll off the plate. It fell and took on a life of its own. He tried to catch the airborne cannoli. In the meantime the coffee cup in his right hand also took on a life of its own. It also went up in the air. The moment froze in my mind. It was a surrealistic juggling act headed for disaster. I lunged to get out of the way. The coffee explosion missed me but I did get nailed by the cannoli on my ankle and foot. The coffee cup fell into a box of photos we were looking at. The cannoli plate exploded and shattered on the side of the table and much cannoli sugar and cream covered everything. Nothing was spared this cataclysm. There was cannoli cream on top of one of Frank’s cameras. The photos were destroyed. Every photo had damage. Frank was FURIOUS. Frank jumped up. He burned his leg a bit and started a nonstop string of swearing. He jumped around for a minute. He couldn’t believe what he just did. He frantically tried to clean the camera. Everything else, including me, was secondary. Everything was coffee-cannoli stained. I'll never forget it. It was the funniest moment I have shared with Frank. You had to be there to appreciate the complete absurdity of the event. It took just two seconds, but everything just exploded into a cataclysmic Frazetta Frenzy. I ran to the bathroom and tried to clean my shoes. Frank took the box of photos outside and dropped them in his dumpster.

This is why we see many sketch sheets littered with coffee stains of every size and design. I have reproduced a few examples along with an actual picture of Frank pouring coffee in his darkroom. It's best to be far away from Frank when he has coffee in his hand! I sure do miss that man.

And, of course, as always, all art is © by the Frazetta Estate. The pictures are ©2011 by Dave Winiewicz Please do not write to tell me about the correct singular and plural of cannoli. I looked it up. I am using it correctly.

PS: Yes, on the way home that night, I stopped at the dumpster and retrieved the box of photos. I was able to rescue a number of gems.