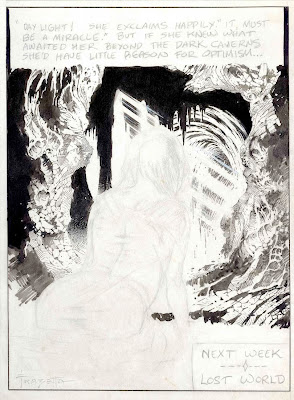 I wanted to wait until I found the Frazetta quote that explains panel three. After much searching I found it. Now the entire tier can be seen.

The third panel in this tier is simply a masterpiece of rock rendering. The sheer creativity and visual inventiveness present in this rendering scheme is amazing to behold. I've never see anything like it. The entire page, of course, is an example of world class draftsmanship, but I always thought there was something special about this one panel. Plus, I was perplexed that Frank put so much effort into it, but never finished it.

I asked Frank about this panel and why he never finished it. Frank replied: "I did that whole project on spec. I was looking for work. The comic strip artists got paid a lot better than the comic book people. I wanted to get my foot in some door. I did that TIGA strip for the same reason. I thought this NINA strip would catch someone's attention. A sexy girl lost in some strange land by herself...why not? Sounds great. I loved drawing the girl. She was one of my girlfriends. It turned out very sultry. I had her falling into some water. Nice design, good action, I was pleased with it. I really couldn't have inked it any better. Everything just flowed. It was really the best inking I was capable of at that time. That final panel where she comes into the strange world had me thinking. I remember all those stories and fairytales where the arches and doorways and windows are all important. Remember that scene in the SEARCHERS with John Wayne? The door opens at the beginning and closes to end the movie. It's unforgettable, isn't it? I wanted that panel to have that impact, something special. I decided to frame her in a rock arch that was different. I didn't know what look I wanted. I remember, vividly now, that I walked outside my studio to have a cigarette. I wanted to find a rock, just a rock, any rock, and look at it. I couldn't find anything but some smooth stones in the street. I took a walk and finally found a small rock in the gutter. It was only two, three inches and covered with dirt. I spit on it three or four times and wiped it on my pants. I just stood there and looked at it. I turned it all over and let the sun shine on it. I kept looking at the color, the tones, the striations, the little veins. I threw it away. I stood there and kept thinking about it. My mind starting adding things to it, adding veins, adding lines. It was growing in my imagination. Strange as it sounds but I was growing this rock in my mind. Weird, eh? That's the way my mind works. All the time. It grabs something and starts adding things to it. I've done that with flowers and vegetation and muscles under the skin. I see something and my brain just completes it, changes it, moves it around. Everything is so clear and detailed.

Once i had this idea of the rock I just sat down and drew it. I had fun with all the swirls and lines. It was like a tree, except it was rock. I had my great entranceway. Now, what to do about the girl. I pencilled her in quickly, then stopped. I didn't know what to do with her. I didn't want her to draw attention away from the rock. I gave up.I also had the problem with the story dialogue. Those damn words were everywhere. I had text in the first two panels but I blacked it all out. Too damn distracting. I just couldn't figure out what to do. I never did. That's why I stopped. The strip was never picked up so there was no reason to finish it. It's been in the closet for years."