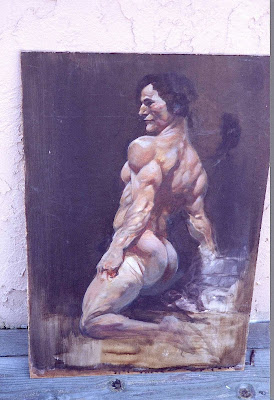 This photo comes with a story. I photographed this one at the same time I shot those LORD OF THE RINGS studies. I saw these ONE time and never saw them again. I preserved this discussion word for word.

DW: What is the story behind this oil, Frank? I've never seen it before.

FF: I don't like it. It's a failure. I started painting it right after drawing that graveyard picture for the Kubla Khan drawings. That one [Frank points to the kubla khan death scene hanging on the wall of his studio.] I really like that drawing. I worked hard to get it right. Do you remember all the comps I did for that? All the other drawings came pretty easily. My other favorite is that Lord Of The Rings Black Knight drawing. I got the weight and the forward movement at just the right moment. Perfect balance, perfect motion. That really turned out well. No effort. I remember being excited to see how it would turn out. It just flowed onto the paper like I wasn't even holding the brush. I guess I was in a zone of some sort. That happens when I really get excited about an image. Like that Buck Rogers cover I did for Gaines. Same feeling. I did little studies in pencil for most of the other drawings. That death scene design took me longer. I toyed with different ideas. I must have run a hundred ideas through my head.

DW: Yes, you did more than you did for any other plate in those portfolios. Why? What were the problems you wrestled with? You went from something highly dramatic to something almost spiritual and prayerful. Those early studies were kind of obvious and stale, weren’t they? The final solution is PURE Frazetta. The idea and execution are perfect. I never tire looking at it. It stops me in my tracks every time I walk by it. It’s as good as anything, isn’t it?

FF: Exactly. I couldn't get a clear idea of what I wanted. I would do a study, look at it, then realize that it wasn't me. Images kept spinning in my head. I was thinking of world war II movies, cowboy movies, all sorts of death scenes. I wanted something subtle, but still have the emotion and the power, the energy. It’s been done so many times that it was tough to get a new take on it.

Less is more. How many times have I said that? I kept simplifying it in my mind. I finally got it. I did a very elaborate pencil. Did you ever see the pencils? Cochran flipped when he saw them. He thought they were better than the final inks. No, the inks were better. Who cares about a pencil? Too easy. Make a mistake and just erase. No big deal. Why do these kids make such a big deal about pencil drawings. If you can’t do a decent pencil, then get out of the business.

DW: Frank, I always thought that bicep carried all the emotion. The muscles showed tension, stress, and sorrow. The gesture of the body is simply perfect...respect and sorrow and ultimate loss. He lost his best friend. His world has shrunk and constricted. His body position is the same way.

FF: You got it! The life is there; I caught just what I wanted. I did a quick watercolor of the scene. I wanted to see if I could capture it in color. The watercolor was shitty. I hated it. I looked at it and never looked again. I think Ellie hid it somewhere upstairs. She was afraid I’d throw it out. I decided to try an oil. This is it. [Frank picks up the oil.] I wanted to focus on all the muscles. I wanted the muscles to talk. I wanted to feel them, to get some emotion coming off the body. Failure. Nothing. Looks like a goddamn statue. Lifeless. At least to my eye it is.

Didn't work, didn't capture it. I stopped. The more I looked at it, the more I disliked it. I threw it in the back of the cabinet. Why show it? It's not even good enough as a life study. See that black blob on the right? That was going to be a long shock of flowing hair. I was going to make the face more oriental. I didn't know what to do with it. Wasn't worth my time. I wasted enough time on it. Maybe we can burn it in the yard. Put it back in the cabinet, I can't look at it anymore."

I took it outside and shot one quick picture, then I put it back in the cabinet. Thank God the picture turned out. It’s not often when Frank expresses such complete exasperation. I thought the original was pretty impressive. I wanted to buy it, but I didn't think Frank would sign it. Also, I didn't want him to think less of me for having such poor taste as to actually want it. I was caught in the web of aesthetic politics, Frazetta-style. Thwarted again.

The original is interesting because Frank took the composition a bit further than the initial umber underpainting. We are here right in the middle of his creative process. He started to add some color highlights, then he just stopped. All the anatomical abnormalities would be corrected in the finishing process. No photos here, just inspiration from the mind's eye. I did snap a shot of the watercolor, but I haven't found it yet. I have it somewhere. It’s not that impressive. Frank was right about that. All this came out of a manilla envelope with photos I had completely forgotten about. Thank God I found it. So many trips, so many memories. Rediscovering memories like this is a complete joy.

I wonder what happened to these originals? I hope Frank didn't decide to warm his hands in the backyard.