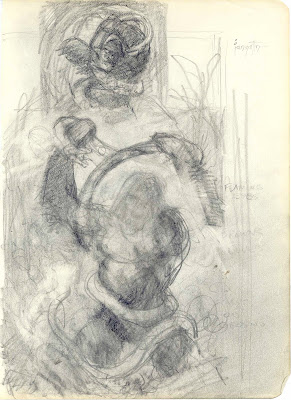 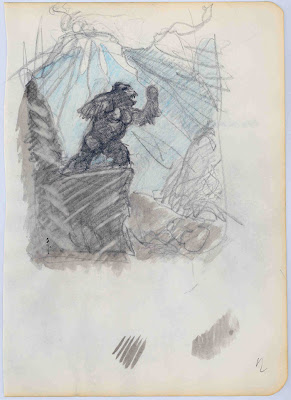 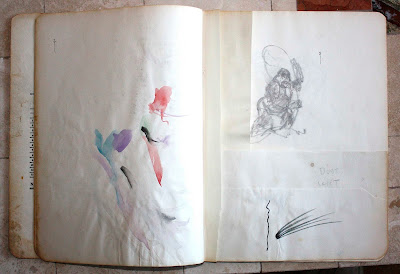 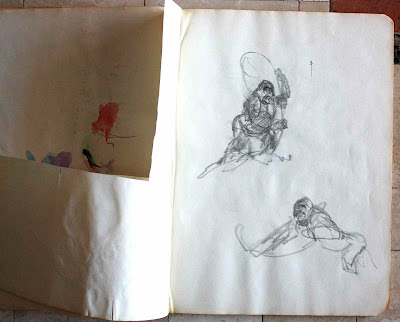 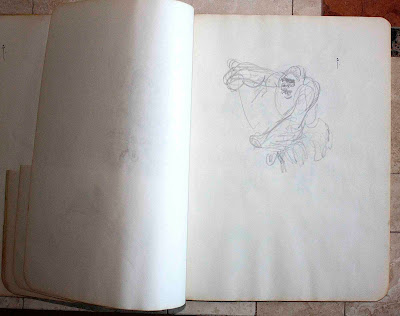 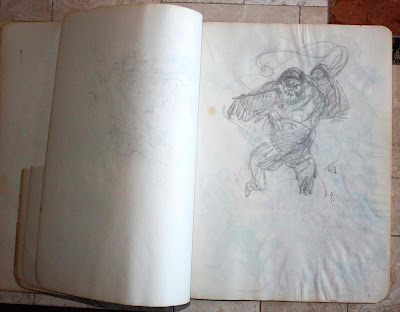 These are consecutive pages from an early 1970's sketchbook. Actually, the first two images come after the others in the line of creation. The blogger site mixed up the sequence. In these pages Frazetta was warming up to do the large King Kong oil where Kong battles the huge snake. These pages lead up to that final watercolor study. Unfortunately the study was clipped from the book and sold before I could capture it in its integrity as a full sketch page.
This gives an idea , once again, of Frank's working methods. In this case he used these slight pencils as simply a warm up to get a "feel" for the kind of line he wanted and the type of pose. Notice all the clipped pages in the first photo of the open sketch book. I wanted to preserve the authentic look of these "butchered" sketchbooks. Ellie sold it all for quick cash and Frank didn't think it was important enough to save images for posterity. I told him time and time again, but he wouldn't listen. He thought I was nuts to be so concerned about studies.
I recall my earliest visits when all his sketchbooks would be lined up on his cabinet shelf. You could follow the flow of Frank's creative juices year by consecutive year in those books. Now, they are ALL gone and pages resting in collectors' closets, and under their beds, and in their trash cans, and god knows where else. Am I bitter? You bet I am. What a loss to art history. Not being able to preserve and document the nonstop creative flow from such an artistic genius is a sin against art history. I was hitting my head against a brick wall. I saved what I could. It wasn't easy getting any of these photos. I had to wait until Frank was in the right mood and make sure that Ellie wasn't around to stop me or start a fight with Frank. I thought it was important enough to make some serious efforts in this regard.
This highlights another issue for Frazetta collectors, namely, authenticity. Sometimes a real Frazetta doesn't appear to be by Frazetta because it is simply one of these very minor warm up pieces. As I said, Ellie sold everything, both the good and the minor. Other times, there are faux-Frazetta pieces out there that give a hint of Frazetta and easily deceive the uninformed eye. There are a LOT of forgeries out there, some very sloppy, some rather skillfully done with the direct intention to deceive for profit. Pages are carefully torn, stains are added, and loose lines abound in all these phonies. Many of these are laughable in their over earnestness to deceive. Others take a trained eye to spot. All I can say is: be VERY careful. At the end of his life even Frank had a hard time figuring out what was his work. Ellie, of course, was hopeless. She simply dismissed many authentic pieces as forgeries. I have story upon story about these encounters with collectors. They all ended-up calling me to try and get the real story. I have seen 99% of Frank's sketchbook work, so I have a real good idea about what is what. I collected samples of all the types of paper Frank worked with. I used to do all the forgery analysis for Frank and Ellie, but I have now given up. I'm not getting paid and there is more and more in the marketplace. It's not a good situation. I cringe when I hear about people paying 2-3K for a forged piece of nonsense.
When HERITAGE bought the 3 big Frazetta sketchbooks from the Alexander Gallery, their intention was to break them up, cut them up, and sell the extra originals for enhanced "cut up value" as they called it. I contacted Jim Halperin and asked him if he could send me scans of all those pages before the knife hit them so I could possibly reassemble them for posterity in their full integrity. Jim owed me a favor. I was writing the Frazetta descriptions in those early auction catalogs and I had introduced Ed Jaster to Alex Acevedo of the NYC Alexander Gallery in San Diego and gave Alex his first HERITAGE catalog. Jim Halperin and Alex hit it off and HERITAGE bought Alex out, including tons of Crumb and the Harvey Warehouse art archives. They had also bought the 1952, 1954, and 1962 Frazetta sketchbooks almost in their entirety. Jim asked one of his assistants to provide me with the images. Lo and behold I received a CD in the mail several days later. Quick work. I was ecstatic. The pages would be preserved. I stuck the disc into my computer and my heart sank.....EVERY image was small and blurry. They photographed the pages and, whoever did it, royally screwed up. I gave up. It just wasn't meant to be. Jim tried to help, but we were thwarted by someone just not paying close enough attention to his job.
The pages got cut up and sold. I managed to buy 4 complete pages to rescue them. I posted three of them in an earlier essay; they were studies for the men's magazine illo of the floating girl.
It's too bad none of Frank's serious fans in the 60's made the effort to preserve these images. I tried. Failed.
Oh well...
(c)2011 DocDave Winiewicz
Posted by DocDave at 7:29 AM