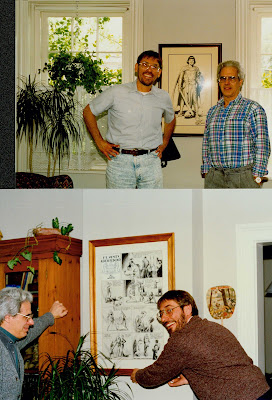 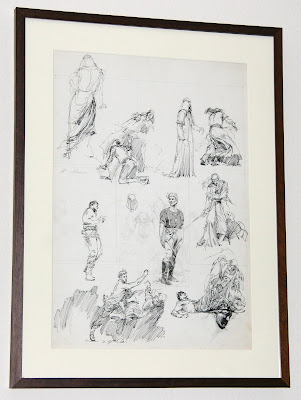 I really miss Al Williamson. I used to visit him on my way to visit Frazetta. He lived in Honesdale, Pennsylvania. From there it was a short ride to Frazetta's estate in Marshall's Creek. We did many, many deals over the years. I would trade him originals by the classic illustrators such as Matania, Joseph Clement Coll, Franklin Booth, and Godwin. In return I was able to pick up a number of nice examples by Alex Raymond. Over the years I owned a number of superb Flash Gordon originals:
1-27-1935
3-3-1935 (Rare Tabloid)
3-24-1935
5-5-1935 (Rare Tabloid)
9-8-1935
9-15-1935
2-23-1936
3-8-1936
4-5-1936
1-15-1939
5-24-1942
I got 3 or 4 of these directly from Al. Alas, all are gone. I transformed all of them into Frazetta originals. The FLASH page I really wanted was the great whipping page tabloid format page from 1935. I never got it. Heartbreaking! Al ended up selling the page for $50,000 to a Texas collector. It now resides in a Parisian collection. Al used the money to put an addition on his new home. That addition added a large studio to the back of his house. Al finally had plenty of room to store all his books and display many highlights from his massive collection. I owe Al a real debt because I was able to mature my knowledge of comic and strip art during our many discussions. Al was a collector's collector and his passion was second to none. He loved all types of art and he was one of the great students of the medium. A visit to a truly great collection like Al's helps to expand one's outlook and to focus on the real essentials of art. I was blessed to be able to learn at the feet of grand masters such as Frazetta and Williamson. For example, they taught me how to appreciate Foster's Tarzan strips and to appreciate all the subtle nuances present in that incredible strip. I was fortunate to have most of Al's Tarzans in my possession at one time or another. I had them repaired, cleaned, and deacidified to preserve them for the future generations.
Frazetta and Williamson had a very vitriolic relationship over the years. They fought and made-up numerous times. They had minor and major disagreements over the years. In the last ten years of their relationship Al refused to call Frank simply because he didn't want to take a chance on having to talk to Ellie. Al did not like Ellie at all. That's a long story for another time.
In any case, I want to focus on just one event. It was the early fifties. Al asked Frank to draw a picture of Flash Gordon. Williamson, of course, was a Flash Gordon fanatic. He spent most of his youth drawing Flash a hundred different ways. He wanted to see how Frank handled the pose and the heroic posture. Frank said that he sat down, pencilled a figure in a fantasy setting, then proceeded to ink it. In the midst of this Frank described the proper procedure for applying zipatone to give texture and depth. Al was looking over Frank’s shoulder the entire time. For some reason Frank stopped before finishing, but most of the scene was done. Al loved the figure and asked Frank if he could take it home to study the lines. Frank agreed. Al took it home and started drawing sketches around Frank's Flash Gordon figure. A couple of weeks later Frank asked Al where the drawing was. Al said that he covered it with sketches. Frank said: "It's mine. I want it back." Al had to return the piece. It was a point of principle. Al made a stat of the page before giving it back.
Frank forgot about it until we discovered it one day way in the back of a closet. Frank told me the story behind the piece, then concluded by saying: "And then Al had the balls to use my figure in an EC story." Al used the picture as the central figure on the SPACE BORNE splash page. He changed some elements, but you can easily see the resemblance.
Well, I thought this was quite an interesting piece of Williamson/Frazetta history. I bought the page from Frank. He really didn't care about it all. I think he was happy to be rid of it. For Frank it just represented an annoying memory.
I reluctantly brought the page to Al. I didn't know how he would react. To my relief Al was the consummate gentleman. He confirmed all the details of the story and he signed the page for me. It's a large 14 by 20 inches in size and quite impressive in a frame. Frazetta teaching Al Williamson all about Flash Gordon; it doesn't get any better!
(c) 2010 docdave winiewicz
Posted by DocDave at 11:00 AM