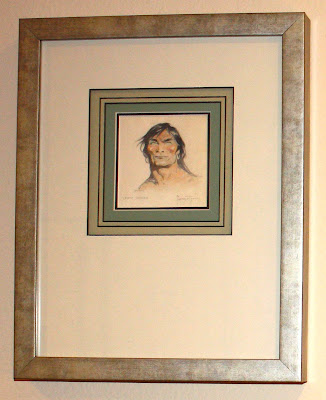 Tor paperbacks contacted Frazetta in the 1980’s with the idea of producing a series of Death Dealer novels. They wanted some new oils to place on the covers. Frank liked the idea and immediately set to work to find a writer and he started doing a series of Death Dealer watercolor studies in a fresh new sketchbook. He numbered the studies consecutively as he finished them. Jim Silke was hired to write the books and Jim incorporated a lot of imagery from all the other works in the Frazetta body of art. After a number of these books were published Frank thought that it might be necessary to reveal the Death Dealer without his helmet. Frank said: “If this thing takes off, then the fans will want to see him. You can’t have him with his helmet on all the time. At some point the mystery has to end. I wanted to have the Death Dealer as a no-nonsense no-bullshit kind of guy. A hero with very strong features, sunken eyes, prominent cheekbones, just very strong features…hard, intense, intimidating. This is a guy who will kick your ass at a moment’s notice, like a jungle cat seeing his prey and IMMEDIATELY pouncing. No holding back…pure animal intensity. I only did the one drawing. It turned out pretty nice. I was happy with it.”

Alas, the books faded. I’m not sure if there were other money considerations at play in the demise of the series. It did motivate Frank to paint some incredible works. We should all be thankful for that. All the watercolor studies were given life as oils except for two. Those two studies have never been published. Frank never got around to painting them. One of the Death Dealer studies was painted as a left-handed oil during his last years. It has never been published or seen.