One Quiet Night...Frazetta Begins To Dream 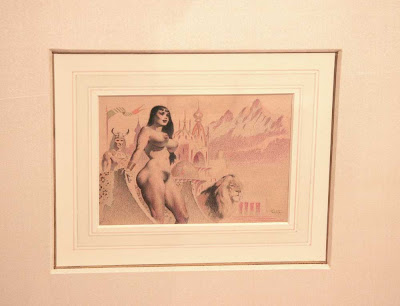 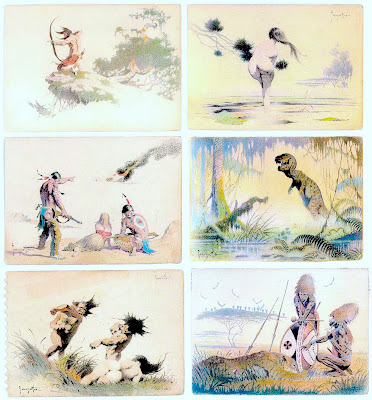 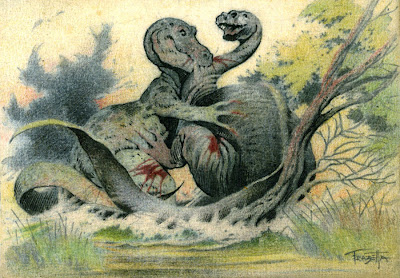 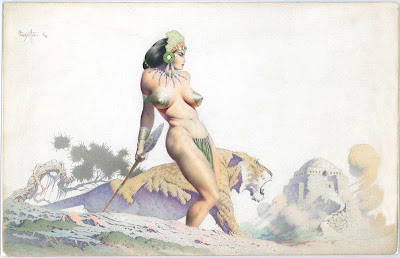 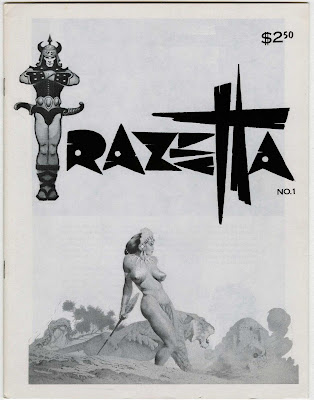 The arc of a life is composed of many deliberate decisions and many moments of sheer serendipity that profoundly influence the ultimate outcomes within an individual’s life. Frank Frazetta has had a very long career in the art field and he has had many important moments within that sixty years. The decision to assist John Giunta and enter the comic book field and the decision to leave comics and join Al Capp as a ghost artist on L’il Abner are but two examples of defining moments in his career that had long term implications. However, as I consider the long expanse of Frank’s career, there is one moment that stands out as absolutely critical. In the fall of 1960, Frank doesn’t remember the exact month; he retired to his studio after the family had gone to bed. The night was quiet and a bit cool. He made himself a cup of coffee and was ready to watch TV. He glanced at the chaos of his drawing table and noticed some colored pencils. Suddenly, he had an urge to draw. He grabbed the pencils and found a small, cheap notebook. He decided to put on some classical music. He left the studio, grabbed the coffee, and sat down on the far left side of his faux zebra skin sofa near to the light. He took a sip of coffee and started to dream. His mind opened and a torrent of images raced through his consciousness. He was alert and inspired. He started to draw. The images just jumped onto the paper. He conjured up different scenes…cowboys, cavemen fighting, a graceful nude, prehistoric scenes, a Masai warrior ritual, and a Tarzan-like image of a warrior delicately balanced in jungle foliage. He did another scene with a large-breasted totally-nude Queen on her throne with lion and servant (This image has never been published). Frank remembers that these images appeared as if by magic. They were relentless in leaping out of his imagination. The art was flawless, beautifully colored, with elegant designs. All executed with color pencils. The blended tints are a foreshadowing of what would appear in his oils.


Frank doesn’t recall if these drawings were done over the course of one or several nights. It doesn’t matter. Frank needed to draw these images. Something called to him and he responded. After all those years of picking up a check, raising a family, and drawing bigfoot comic characters for Al Capp, Frank needed to look inside of himself to see what was there. There was plenty! Frazetta had begun to dream again, the seed was planted; the real Frazetta was being reborn in those quiet evening hours. Bear in mind that Frazetta did very little personal creative work during his tenure with Al Capp. On two or three occasions he did attend a life-drawing class with Al Williamson, Roy Krenkel, and others. This happened in 1957. He drew over a hundred drawings. Interesting work, but it pales in comparison to the creative work he did during 1944-1955. Roy Krenkel knew that Frank was wasting his talent by limiting himself to ghosting chores for Capp. Roy knew that there was greatness in Frank waiting to re-emerge. This little series of colored pencil drawings was the catalyst for Frank’s emergence.


Later, he finished off this flow of creativity by attempting a work that was a bit bigger and more ambitious. This drawing was first published on the cover to FRAZETTA FANZINE #1 in 1969 (although drawn in 1960). It was published in B/W, but the fans were still in awe. What a piece of art! Where did this come from? It is a little piece of perfection and it opened the door for Frazetta to emerge with all his formidable power and irrepressible imagination. The “Lion Queen” exhibits all the major elements that would define Frazetta’s later worldbeater career: delicately drawn vegetation, an incredible lion companion, a mysterious palace/fortress engulfed in strange mists, and a drop dead sensual Frazetta female replete with glowing thighs and knockout body. Every element of Frank’s artistic personality can be found in this image. This piece is as good as anything Frank ever did. One could rhapsodize about this creation for pages. There is so much there, so much to be seen and felt:

"for more than a few moments. It’s one of those magical places wise people like to talk about.
One of the things they say about it, that is true, is that, once you’ve been there, you’re there forever. "
Mary Oliver, b.1935 American Poet

It is a majestic work and its importance to the coming career of Frazetta cannot be overstated. This was the piece that gave him confidence and launched him into his future. From here, it was a short leap to the world of paperbacks and the other oils and watercolors that influenced generations of artists and redefined the standards for artistic excellence.


All because one night Frank had the urge to draw, to dream, to go back and recapture the essence of his childhood pleasure. Thank God for those colored pencils!

A thank you to Rich Dannys for the image of the battling dinosaurs. This was another unseen treasure that only recently emerged from a private collection.

Jason Moore said...
Hi Dave, I see not many have commented on your blog, so I would like to take a moment to do so. I wanted to let you know that I am really enjoying your commentary and insight into Frazetta's work. I have been a fan ever since I was a teen and he has really influenced my work. My dream is to one day be able to visit the Frazetta Museum and one day to possibly meet Frank somehow lol. Again, thanks alot for your insights and I am looking forward to reading much more!
May 23, 2008 8:27 AM

BATTLEGROUND VICTORY said...
Excellent piece. Frazetta's work has astonished me since a boy, and had an enormous influence on my own artistic explorations. Thanks for returning to your writing concerning this prodigious creator.  SEAN
May 23, 2008 12:33 PM

Tracy said...
Dave,  Ever since seeing some of these in the early Ballantine books I have always loved the soft and subtler shadings and feelings of these images. I had no idea of the story you just told, but it makes me love them even more.  Even as much as I love his oils, these like the pencils seem to always gravitate to my favourite spots. It would have been cool to see him do something along these lines in the oils. There is so much more to these than the oils could ever bring in my opinion.  Thanks Dave!  Tracy
May 24, 2008 7:42 AM

Scott Rosema said...
Hi Dave,  Thanks very much for your insightful essays on Frazetta's work. It's truly a "co-inspiration" along with Frank's work itself.   I can feel the creativity growing inside me as well.   I'd like Frank, Ellie, their family and yourself to know how very, very much I appreciate the presence in my life all of you, through Frank's work and inspiration, represent.  Please enjoy my work as well. When you have a moment, look over my web site pages at: http://www.catskillcomics.com/Scott%20Rosema.htm  and http://www.directoryofillustration.com/ArtistPortfolioThumbs.aspx?AID=2130 Tell Frank of me and help me to let him know how much his work has truly been a foundation for me to pursue my own visions of beauty.  I hope he understands what it means to have his work "live" in others. I know it does in me; and that is something that defies all meanings of worth or value. It is something that goes beyond influence or flattery.   I believe it borders on something very close to immortality; or, dare I say, divinity? What, after all, is the bigger pursuit in life than the expression of truth and beauty?  Franks work has always had those qualities; in absolute abundance.  Any truly great artist does.   Thanks very much for any help you can give me in getting these words to Frank.  I'm excited to hear your next essay.  Thanks again! I do my own dreaming on those kind of quiet nights.  Take care! Scott Rosema
May 26, 2008 9:12 PM
Posted by DocDave at 7:51 AM