Frazetta and the Old Man 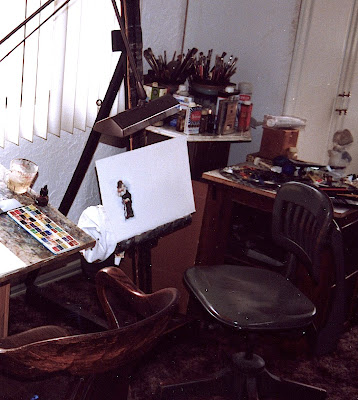 I walked into the kitchen and was greeted by Ellie Frazetta. This was late in 1995. She said: "Hi Dave! Frank is anxious to see you. He started painting left handed. He finished his first oil. It's a picture of an old man. I looked at it and started to cry." Before I could ask Ellie why she cried, Frank emerged out of the studio, shook my hand, and offered me some coffee. We went directly to the studio. The words of Ellie still puzzled me, but not for long.
I walked into the studio and saw the small painting of a little old man on his easel. I immediately congratulated Frank on the outcome and expressed my amazement at how well it turned out. It was his very first left handed oil after his major strokes. Before this he had drawn a number of pencil drawings of varying quality. This was a breakthrough.
I knew then and there why Ellie cried. Frank had painted himself, how he felt, how diminished and frail he had become. Somehow, some way, his subconscious had directed him to this subject matter. I didn't pursue it. I shot a few photos of the oil, made some more laudatory comments, and then moved on to another topic. That little oil hit me like an emotional sledgehammer. I had to sit down. I couldn't even look at Frank for a few minutes. I sipped my coffee. I felt sorry for Frank, deeply and profoundly sorry. He felt his mortality and loss of native powers. He was trying to exorcise those feelings with this oil. He never returned to that theme. I don't blame him.
It's often been said that the true autobiography of an artist can be seen in his works. At this moment, that was never truer.
(c) 2012 Doc Dave Winiewicz
Posted by DocDave at 7:10 AM