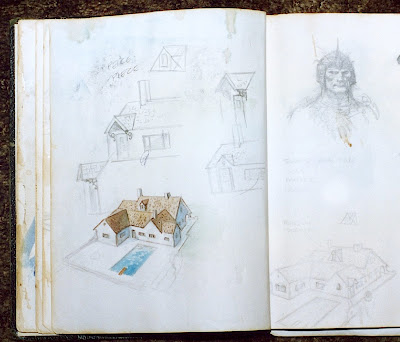 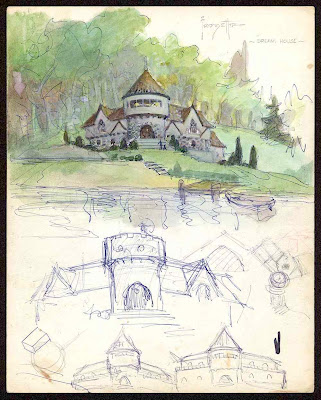 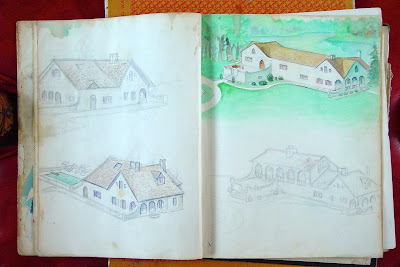 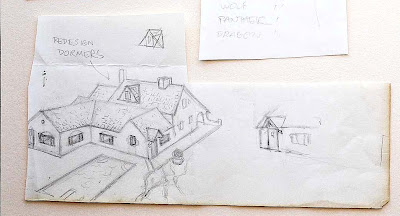 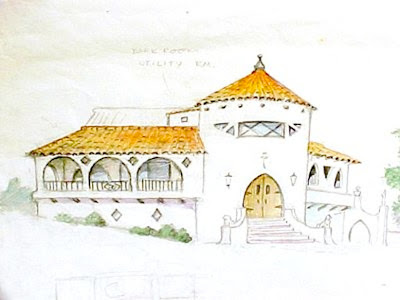 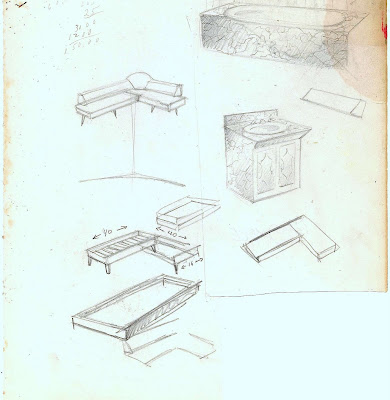 These pages are home design revisions from the mind of Frazetta. The Frazetta home in Marshall's Creek, PA underwent many changes from the time of its purchase in the early 70's. It started as a single story cottage, run down and filled with clutter. There was a barn off to the side. Frank added a pre-fabricated second story to the cottage, then he added an expanded living room, then he added a new studio. These sketchbook page revisions reflect a time when Frank wanted to expand the house further with a swimming pool. Originally the pool was going to be enclosed and feature a very primitive jungle motif with rocks and vegetation. At the very last minute Frank rejected this idea because of potential humidity damage to the paintings. He called the idea "Frazetta's Folly".
There is one museum design in the group that derives from the home designs. The original museum idea featured a separate studio apartment for Frank on the second floor. This would have been Frank's private getaway area. He wanted some separation from Ellie. Ellie said it was too expensive, nixed the idea, and plans reverted to a single story design.
At one point Frank wanted to build an all new home on a different part of the lake. Frank Junior had just built a large home across the other end of the lake and Frank wanted to outdo it. Frank's medical issues put an end to those ideas.
Many people wonder why Frank chose the Pocono mountain area as his destination. Frank was clearly disenchanted with the whole NYC-Long Island area. Ellie had found a large tudor-style house that was turnkey move-in ready, but Frank wanted no part of it. He said "no". He was tired of neighborhood living. He wanted space; he wanted the stereotypical "room to breathe". The reason for Pennsylvania is that the National Cartoonist Society would have yearly golf outings at the Shawnee-on-Delaware resort, the Shawnee Inn, owned by Fred Waring, an early supporter of the NCS. They gathered to celebrate his birthday every summer. In addition to cartoonists, many celebrities would show up. This is where Frank played golf with Hal Foster and met Jackie Gleason. This was located right in the middle of the Pocono mountains. These outings influenced Frank. He loved the mountains and the isolation of the area.The land was very atmospheric, very moody and mysterious. The summers featured heavy fogs and constantly changing weather patterns. The vegetation was thick and rich; the area was populated by many animals from deer to rabbits to coyotes to bobcats. It was the perfect location for Frank. It was this very 65 acre parcel of land that influenced George Lucas and Clint Eastwood to buy up sections of California. They both saw what Frank had and they wanted the same thing.
Frank settled in and let the world beat a path to his door. It was a magical house in a magical setting.
(c)2012 Doc Dave Winiewicz
Posted by DocDave at 6:33 AM