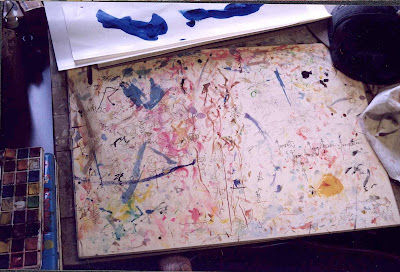 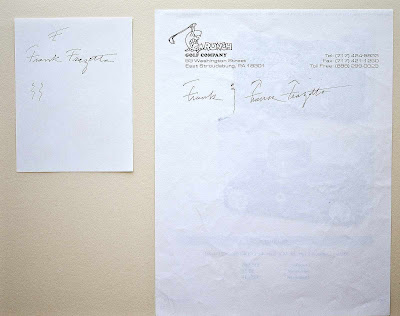 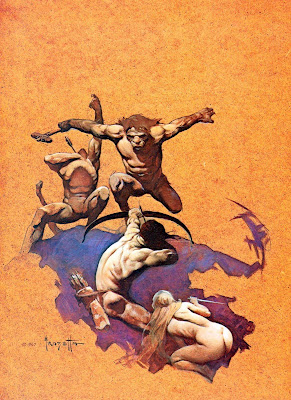 The professional signature of Frazetta underwent many changes over the course of 50 years. It was not an easy signature to draw or paint. The oil reproduced above is an example. Frank said this in response to one of my questions: "You know...my name isn't easy to draw. It takes work to get it just right. See that painting [He points to the HUNTER OUT OF TIME oil hanging in his studio] it took me four times to get it right. Four times! I finally got it the way I wanted it."
Now, that's a perfectionist. The signature on that oil is exceptional. If you get a chance ever to see the original, look closely at that signed area. I marvel at it.
After his first two strokes Frank's professional signature was never the same. It was a supreme effort for him to even attempt it. The results were stiff, labored, crooked, and unnatural. He tried it using both hands. Both hands failed. Please don't ask me to evaluate the authenticity of later items signed by Frazetta. They may or may not be. If it looks bad, then it's probably good. I reproduce a picture of Frank's drawing table which has a big thick board on it. Frank would draw ink drawings and watercolors on this board in the pre-stroke days. After the strokes he abandoned pure ink drawings and relied on pencil. Notice on the surface of this board all the many times Frank began to practice his pro signature. Notice how weak each attempt is. This was profoundly frustrating for Frank. Also notice the tray of Mickey Mouse watercolors that Frank used for coloring. And, of course, the overall Frazetta chaos and visual cacophany jumps out of this photo, even a big blob of dried glue on the board. Imagine all the carefully crafted, life-infused beauty that emerged from this artistic jumbalaya. I hope someone preserved the board. The other side is equally interesting, but I didn't photograph it. I simply forgot to do it. I always thought that an artifact like that takes you right inside an artist's head. I look at that board and I see a thousand images of Frank smiling and a thousand laughs.
I noticed during the times I would take Frank to the hospital for blood tests that he would sign the forms with his right hand cursively. The extra papers I reproduced contain examples of Frank signing his name cursively with his right hand AFTER the strokes. He was practicing before signing some ULTIMATE TRIUMPH books for me. Notice how he achieves a much smoother result. I had Frank sign later books exclusively with this cursive signature. It simply looked better. I never attempted to have Frank sign with his pro signature. It was simply too painful to watch him attempt it and I know he was embarrassed by it.
The evolution of Frank's signature and its many phases is worthy of a big essay by itself.
(c)2012 DocDave Winiewicz
And, of course, I reserve copyright on all my photo images. The Frazetta Estate reserves copyright on all art depicted in any of my postings.
Posted by DocDave at 11:19 AM