Frazetta: Tarzan And The Antmen 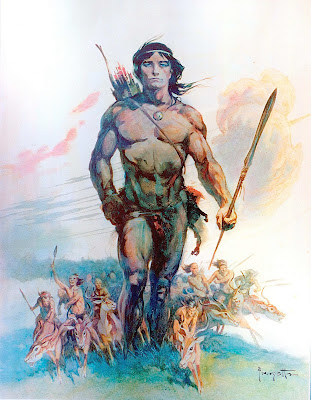 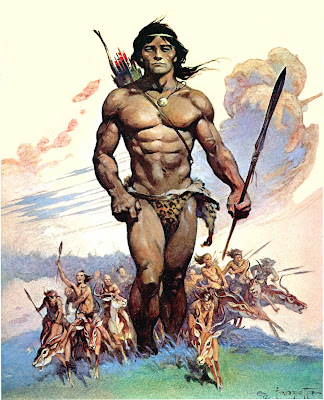 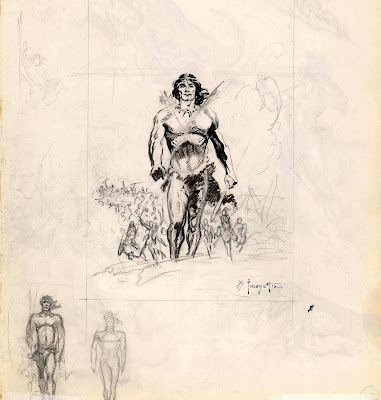 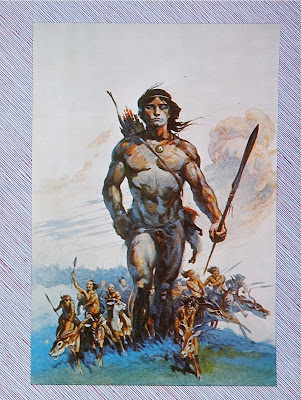 Tarzan And The Ant Men was produced as a spec piece to show publishers what Frazetta was capable of. Vern Coriell, one of the founders of fandom and one of the early passionate enthusiasts of all things Burroughs, first published it as the back cover of the great BURROUGHS BIBLIOPHILES #29 fanzine. It was originally drawn as a watercolor. It ultimately ended-up in the collection of Robert R Barrett, another early fan of Frazetta and passionate collector of all things Tarzan and Burroughs related.
Frank wanted to get the Warren magazine oil from CREEPY #9 back, which he had previously sold to Bob. He offered a deal whereby Frank would get the oil back and, in return, repaint the Ant Men in oil and toss-in another Frazetta Burroughs illustration. Bob agreed. The result is what I think is Frank's first repaint. I have reproduced both versions. I have also included the original sketchsheet. Notice how Frank is playing with the figure of Tarzan to get that heroic walking gesture just right. I think the repainted version is better, but I do enjoy some of the color blendings in the original watercolor. I also like the "eyes open" face of Tarzan. This is the first time that a decent image of the watercolor has been seen. The fanzine version is simply too dark and muddy. It gives no insight into the obvious qualities of the original. However, for its time, we were all glad to see it. BURROUGHS BULLETIN#29 is still the greatest of all the FF fanzines/bootlegs.
Vern Coriell told me he preferred the earlier version because the repaint was stiff and featured a standardized washboard stomach that wasn't as inventive.I told him that I disagreed, but I certainly thought his points had some validity. The second version is simply more 3-dimensional; it has more of that Frazetta "presence" I wrote about earlier. The body creates a visual impact. Tarzan is seeminly striding into your living room. It has energy. It's an interesting comparison to ponder. The question of Frazetta repaints is a heated one. Everyone has their opinions.
What do you think?
(c) 2012 Doc Dave Winiewicz
Posted by DocDave at 9:26 AM