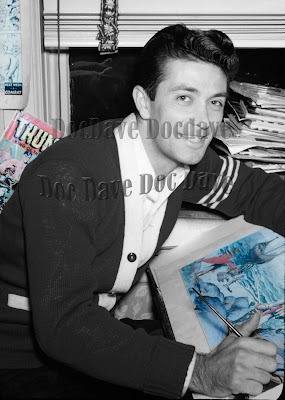 Visiting Frazetta is always an interesting and rewarding experience. The meticulously clean house has a magical atmosphere about it. You’re surrounded by original art, African artifacts, and all sorts of exotic furnishings. After a little lively banter I descend through the family room into Frank’s studio. Frank is usually painting, or fiddling with a camera as I enter. He greets me with a big, welcoming smile and a vigorous handshake. “Dave, are you ready for some coffee?” This is the almost ritualized pattern that starts a visit. Frank is a coffee connoisseur and easily downs a dozen cups during a typical visit. Then we sit down and Frank asks me what is new, what is everyone talking about? And so begins another wide-ranging discussion in which many points are considered. I have spent hundreds of hours with Frazetta talking about everything from Plato’s view of art to the coating on camera lenses.
On one particular visit I mentioned to Frank that several comments were going around that concerned the relation between Frazetta and Hal Foster (of Tarzan and Prince Valiant fame). It was suggested, rather boldly, that Frazetta swiped routinely from Foster and that, ultimately, Frazetta was just a Foster imitator. Frank looked at me as if I had just brought a dead rat into the studio. These were unenlightened comments to be sure and I told Frank that this kind of thinking bordered on lunacy. Frank’s response was direct and immediate. He jumped out of his chair and passionately roared: “Look at the walls! There! [Pointing to the DEATH DEALER] There! [Pointing to the GOLDEN GIRL] There! [Pointing to CONAN THE WARRIOR] Where do you see Foster? Show me just a part. Show me where you see Foster. HE IS NOT THERE! Period.” Frank’s response was perfect and final. However, this leads to a few thoughts on Frank’s early influences. Some people say that Frank is such an original that he shows no influences. That is, of course, absurd. Everyone is the result of some prior influence. These conflicting ideas need a little clarification and comment.

Like everyone else, Frazetta’s childhood was filled with direct and powerful influences of every sort. What one sees and experiences in their childhood is so important in the growth process. No one escapes their childhood. Frazetta roamed, ran, jumped, and stalked all sorts of real and imagined creatures in his tough and violent Brooklyn neighborhood. His costume was a simple sweatshirt adorned with a picture of a black panther. He identified with the big cats, with their stealth, smoothness, and quick transition to violent action. After a full day of furious activity, Frazetta would return home and immediately begin to draw. It was almost as if the world’s energy had entered his soul and lit up his imagination. That special magical energy would now appear on the page before him. Frazetta told me that often he would pray for a rainy day so he could just sit and draw without the enticement of the play world calling him. Frazetta is unique. There has never been a more physical artist; raised without the dominance of television, video games, and other imagination-killing devices. His was a world of comic books, newspaper strips, pulps, and his own incredible fantasies.
In published interviews and in countless private discussions, Frazetta has meticulously admitted and explained these early influences. Frank looked at the early Tarzan novels before he could even read; he loved the pictures by St. John. He also marveled at the newspaper strip art of Hal Foster. When he got the TARZAN SINGLE SERIES#20 comic book, he said it was like the Encyclopedia Britannica. The young Frazetta absorbed everything and was affected by everything. He loved the early Walt Disney cartoons, especially FANTASIA and SNOW WHITE. He loved early toys and their exquisite colorings. There was a time when Milton Caniff was Frazetta’s main influence. Frank has several early sketchbooks filled with thick-lined drawings heavily influenced by Caniff. Frank also thoroughly enjoyed the cartoons of Carl Anderson’s HENRY; he was impressed by their complete simplicity and economy of line. POPEYE by Segar was another top favorite; Frank loved the manic energy and loony characters. And, of course, he loved the panel-bursting art of Jack Kirby that was everywhere. If you know where to look, one can clearly see all these influences mysteriously mixed and transformed in the art of Frazetta.
Frazetta’s highest praise has always been reserved for Hal Foster. In particular, Frank absolutely loved the early Foster Tarzan strips from 1932-1935. For forty years, Frazetta had an original Foster TARZAN hanging in his living room. The page is dated 1-21-34 (“The Captive King”) and it is a rare jewel resplendent with jungle, apes, and furious action. This is where Foster was at a creative peak, bursting with originality, creativity, and nonstop vitality. Frank describes Foster’s Tarzan as “perfection”, a landmark in American twentieth-century art that will never be surpassed. Frazetta was not as impressed with the later Prince Valiant pages where Foster became very “stagey” and reserved. The art was tremendous illustration but it never went beyond mere draftsman’s facility into fine art. However, those early Tarzans had a constant explosive dynamism and fluidity that appealed to Frank greatly. The backgrounds provided a real atmosphere. There was genuine passion in those early efforts and Frazetta responded to that. Many people think that Frazetta’s comic work on WHITE INDIAN and THUNDA was strongly influenced by Foster. This is true to a limited extent. He did borrow a few images, but he always greatly improved them in the process. Frazetta never copies; he sees or remembers a visual idea and polishes it to a higher standard of perfection. Frank did not want to copy or imitate Foster; this would be an artistic dead end and completely antithetical to Frank’s artistic personality. Pointing to six or seven borrowed images from a total output of thousands of drawings is a pretty desperate and futile strategy. Frazetta wanted his own voice, his own style, his own approach. Frank wanted to make his own mark in the field. The real influence of Foster on Frazetta was one of artistic philosophy or aesthetic direction. Foster’s world was something that could be BELIEVED; it had a solid sense of reality at its core. The viewer could actually live in that world and experience vicarious thrills as Tarzan swung through the trees, discovered lost cities, and battled savage apes and ferocious animals. That was precisely the direction that Frazetta wanted to pursue in his art. St. John was too romantic, too dreamy, not hard-edged. You just could not get hurt in St. John’s world. With Foster, real death and animal attacks were right around the corner; you had to watch where you stepped.
Ultimately, Frazetta thoroughly eclipsed and transcended the work of Foster. Frazetta carried the art of drawing and painting to heights that Foster would never have dreamed possible. Frazetta produced totally original works of absolute genius time after time. Legions of artists began to imitate him. Frazetta’s world is one of supercharged reality, a world stripped of all its false facades and charades. Frazetta’s world is one of raw, elemental passions and volcanic incident. It is also a world of beauty, sublime and dangerous beauty. Frazetta continued to get better and better, more sophisticated, thoroughly creative and distinctive. Everything comes together in the magical series of drawings he did for the Canaveral Press in the early 1960’s. Nothing in art history compares to them. At the same time he explodes on the scene with paintings that would revolutionize the paperback industry. All this is subject for another essay. We leave it at that. A young boy grows up and becomes a world-shaking presence in the art world; one of the most studied and mimicked artists who ever lived. Frazetta’s pen and brush lit up the world with joy and nobility and beauty. The world owes him a debt of gratitude.