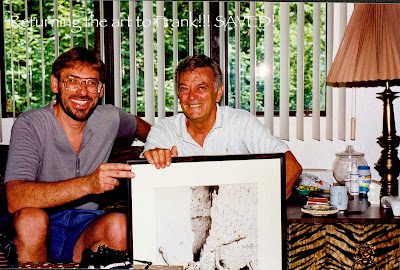 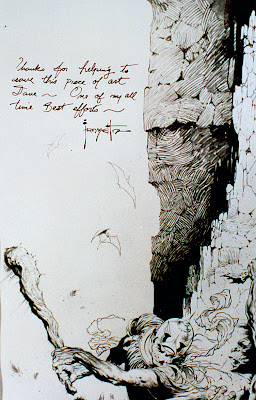 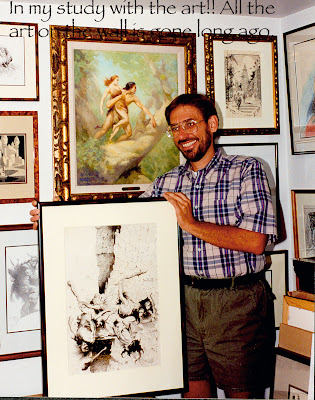 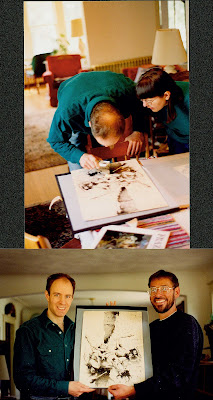 It was in the late 80's when I walked into Frank's studio. I noticed all the FAMOUS FUNNIES covers lying on the carpet. I picked them up and sat down, shaking my head. "What's the matter?" Frank asked. I responded that he can't just leave these things laying on the floor. Someone will step on them, or the bugs will starting eating them. Frank had a problem with ants coming into the studio from the back door. I looked at all the stains and flaws on the covers. Each one had its own set of problems. The WEIRD SCIENCE FANTASY 29 cover was part of the pile. What's this? It was covered with large brown spots. At first I thought it was foxing from all the humidity. Foxing is a bacteria living on the surface of the paper. It eats the sizing that holds the fibers together. I showed the piece to Frank. He seemed completely unconcerned. Later he asked me if something could be done. I told him that I would take it to a professional paper conservator and have it evaluated. I was fortunate in having the Cooperstown School of Art Conservation in my backyard. At the time there were only 4 schools of conservation in the country. Most art conservation is done by "enlightened" amateurs with no real training. A proper and professional conservator must have a chemistry background. A piece is photographed before anything is done to record its state. After treatment a new round of photography is employed to document areas of change. A full treatment report is also given that outlines all the procedures and all the chemicals used. This is usually a document several pages in length. This professional treatment is what I had done.
After leaving Frank's house with the WSF29 I stopped at Al Williamson's home. Once he saw that Frank was getting this major piece done, he decided to give me the famous PRINCE VALIANT "Bridge" page for conservation. Al had mounted the page on cardboard with Elmer's glue and he wanted it removed. Elmer's glue is a nightmare for conservators because of its chemical properties. The conservator took 8 months to finish and delivered the original to Al personally. She enjoyed meeting Al and seeing his massive collection.
I subsequently had a number of other pieces worked on for Al including 4 Foster TARZANS, a Joseph Clement Coll, and a few Raymonds.
One more stop was at Mark Schultz's home. I thought he'd enjoy seeing the WSF29 up close. He was stunned when I brought it into house. I added some pics of Mark and I holding the original. Mark and his wife looked at the surface carefully with a loupe. Mark was stunned by the brownish discolorations.
I had 2 of the most important comic art and comic strip pieces in my home! I was afraid to leave the house!! I spent hours looking at those pieces from the comfort of my sofa.
After a couple of months, the WSF29 was finished. The problem? Those brownish stains were nicotine stains caused by smoke falling on the surface of the paper. Frank was smoking this original into a state of non-existence! Luckily, the treatment regime was relatively benign. The problem was easily remedied. The ink was stable and didn't need any consolidation. I took the page and decided to frame it for Frank. I used 8-ply sheets of rag museum mats both front and back. The hinges were used with archival methyl-celluose. I did a thorough job and a good one. Before doing all this I had a 4x5 inch transparency shot and made some copies. I figured that Frank didn't have a decent repro of this. I made a full size photo repro of the piece and took that with me when I returned the piece. I had Frank inscribe the photo to me. I always had an eye to preserving these little moments in Frazetta history. After all, this was one of the world's greatest art treasures.
That was the first original I had conserved for Frank. Over the next couple of years I also had these drawings worked on for assorted paper illnesses: BEAUTY AND THE BEAST, THE EXECUTIONER, SHEBA, SENORITA O'TOOLE, and a couple other FAMOUS FUNNIES covers (Girl floating in space, and the big planet cover). It was fun being able to spend time with these originals in the comfort of my home. I did my best to educate Frank and Ellie about the importance of art conservation. Ellie thought it was a waste of money. I had to expend a great deal of energy to get Ellie to agree. It was exhausting and exasperating. I was always prepared for a battle of some sort before each visit. Frank quickly saw the light and realized that this would preserve these pieces for future generations.
© 2010 DocDave Winiewicz
Posted by docdaveat 3:30 PM

A very fascinating story, Dave.. Thanks, for sharing it!
Seems such a shame that all of the 'Famous Funnies' covers have now been cast to the Four Winds..

I feel privileged to have seen them in the Museum a few years ago, before the Big Selloffs began!

It's cool that you had an opportunity to preserve a piece of history. It's amazing what those restorers can do though I had no idea it took so long.