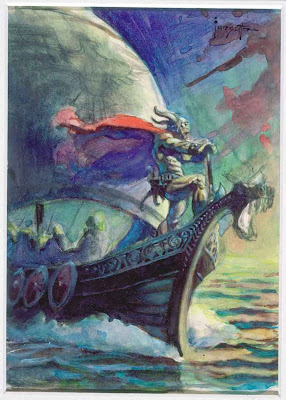 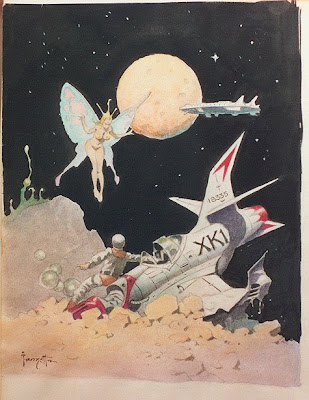 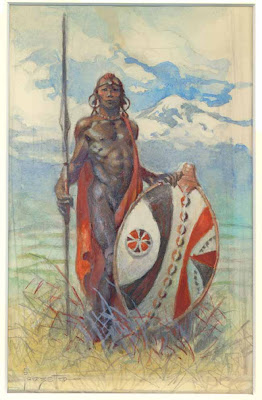 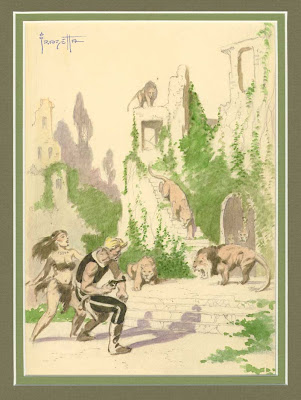 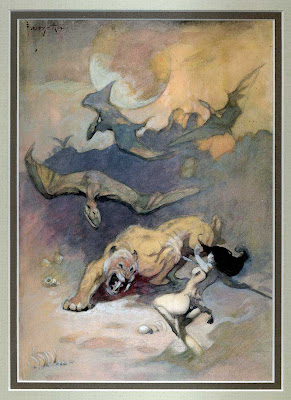 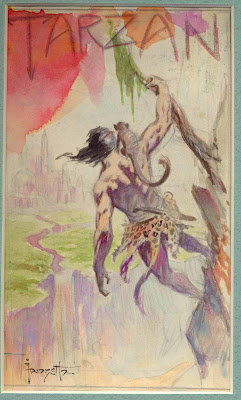 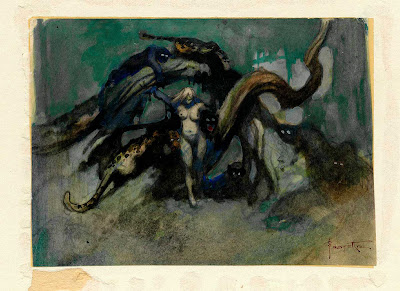 The recent ROUGH WORK volume is a wonderous little collection of these initial imaginings and visual explorations.

This was very interesting. However, it isn't exactly true. I used to think Frank painted everything out of his head when I was in college, but found out he did use models. In fact, check out his own "FRAZETTA" book (which I bought directly from Ellie at the old museum) which shows reference shots Frank often took of himself. Not for every work, but plenty.

If you look at his gorgeous EC story "Squeeze Play", you'll see him and the Fleagle gang in many panels. Same with his JOHNNY COMET work. You can see Frank's face and Ellie's figure in more than one CONAN and TARZAN work. And how about his self-portrait? Frank has said in many interviews he used a mirror.

I used to think an artist had to draw and paint without reference to be great. That using any kind of reference was "cheating." However, I was naive. There's a huge difference between using reference (something to refer to get something accurate, or in case you get stuck) and just copying it. (Compare Boris and Bradstreet to Bisley and Wrightson.)

The Sistine Chapel, the Mona Lisa, the statue of David, Monet's Lillies, Rembrandt's and Bronzino's portraits, Rubens' Daniel, almost every great work of art throughout the Renaissance and beyond (as well as most of the great pinup pieces like those by Elvgren and Petty) made use of reference--models, photos or the artist himself/herself.

There is nothing wrong with it; it simply depends on your goal. If you are trying to make something resemble something from life (whether it's George Washington or a '57 Chevy), it makes little sense to NOT use reference.

Even the great imaginationists like Kirby, Ditko and Hogarth, learned from life, from photos and models and observing the world around them before capturing their imaginations on paper. All of them at one time or another needed to look up an article of history or clothing, or look in a mirror to be more accurate.

There isn't an artist alive or dead that hasn't at least once looked at his own hand or face when drawing or painting something to get it right.

Frazetta is a great artist by himself for myriad reasons. There is no need to spread myths. You do him--and all creative artists--a disservice by doing so.

Mike: I stand by every wood in this essay. I never said that Frank NEVER used reference. He used it VERY seldom. 90% of his work is straight from the imagination with no photos or swipes. hat's what makes his art so special. It isn't deadened by relying on copying for inspiration. Sorry if you don't believe it.

it is a fact that frazetta would look at reference, magazines, or use ellie sometimes to get the lighting right in poses, buuuuuut!!, that stuff represents 5% of his work thats it, the rest is from his imagination, just look at the conan or deathdealer it is truly from imagination, ive neveer seen someone else do what hes done, he is the true prodigy of nature, I never get bored from his stuff, its pure imagination